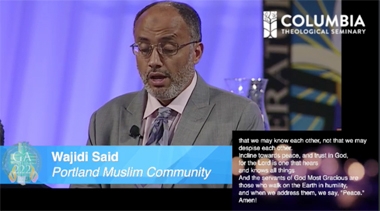 A portion of the Presbyterian Church, U.S.A (PCUSA)'s opening plenary session for its 222nd General Assembly has garnered criticism, as a Muslim offered up prayers to 'Allah' during a time of vigilance for the victims of the Orlando and Charleston shootings.

According to Heath Rada, the moderator of the PCUSA's 221st General Assembly, the denomination's Stated Clerk Gradye Parsons asked the ecumenical and interfaith ministries of PCUSA to organize a time during the first plenary session to remember the victims of the recent Orlando incident and the Charleston shooting which took place last year.

"Allah bless us and bless our families and bless our Lord. Lead us on the straight path - the path of all the prophets: Abraham, Ishmael, Isaac, Moses, Jesus, and Muhammad. Peace be upon them all, Amen," said Wajidi Said of the Portland Muslim Community, after completing a chant in Arabic.

Said went on calling upon Allah and saying God "created us and made us into nations and tribes, from male and females that we may know each other, not that we might despise each other."

"Incline towards peace and justice and trust in God, for the Lord is one that hears and knows everything and the servants of God, the most compassionate, the most merciful, gracious are those who walk in the earth in humility and when bigots and hateful and Islamophobes address them, they say peace. Peace be upon them and peace be upon Allah," he said in conclusion.

Mateen Elass, a former Muslim who now works with a ministry for Arab-speaking individuals called Voice of the Truth, called the event one which "denied the gospel and lordship of Jesus Christ."

Elass criticized the PCUSA for inviting "a practicing Muslim ... to lead the worship of Christians," and pointed out that Said asked "Allah to convert the assembly" during his prayers.

"Praying to Allah ... he was pleading that the Presbyterians gathered there would be converted to the straight path, i.e., becom Muslims," Elass wrote in his blog.

During an afternoon plenary session on Wednesday, Parsons offered an apology during the announcements, saying that "it was never the intention of the one offering the prayer to offend any of us." Parsons' apology statement in full:

"During the interfaith prayer service on Saturday, in response to the killings in Charleston and Orlando, a prayer was offered that went beyond what had been scripted. It was an offense of the head, not of the heart, and came from one seeking to be authentically gracious and part of the healing service. Some commissioners found it offensive. When in relationship with people of other faiths, sometimes we can be inadvertently offensive when we mean to be sensitive and ecumenical. It was never the intention of the one offering the prayer to offend any of us. Nevertheless, we offer an apology to all those who were offended."