Iowa Teen Balances Gender Transition and Devout Christianity: A Story About How An LGBTQ Live Her Life Following Jesus 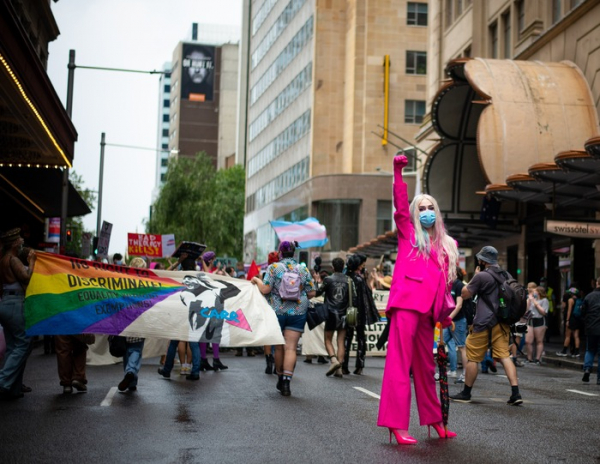 Despite leaving the church years ago, Sid High remains deeply devoted to their faith. In an article posted by MSN, the teenager and their family gathered in their living room to watch a sermon online on a recent Sunday. Despite the unconventional setting, their devotion to God remained strong.

Despite the early hour, Sid had already been up for hours, tending to their daily ritual of lighting prayer candles and praying for everyone they knew. As the pastor of a local Presbyterian church appeared on the screen, Sid adjusted their funky thrift store shirt and sat up a little straighter, ready to listen to the story of Jesus.

Navigating Religion and Gender: How One Iowa Teen Is Finding Her Way

Sid could relate to the danger facing Jesus, as they too faced a threat and hostility as an 18-year-old transgender individual living in a world that often seemed hostile towards people like them. The state of Iowa had even seen parents sue the local school district over trans-friendly policies and a library shut down for displaying LGBTQ books. The governor even made condemnation of trans kids a crucial part of her reelection campaign.

According to The Washington Post, Sid High faced many challenges daily, including being misgendered at work and facing negative comments on their TikTok page, where they lip-sync to popular songs. Even within the Christian community, Sid faced increasing intolerance, with data from the Pew Research Center showing that nearly 70% of white evangelicals believe society has gone too far in accepting trans people, up from 61% just five years earlier.

As the pastor in the sermon they were watching talked about Jesus' determination to love those who would eventually reject him, Sid found themselves growing deeper in their faith. Despite their difficulties, Sid hoped they could follow in Jesus' footsteps and bravely move forward, spreading a message of hope and refusing to stop loving others.

When he was 12 years old, Sid confided in his mother, Jess, that he believed he might be transgender. Despite living in a state that had been one of the first to legalize same-sex marriage and having supportive parents, Sid was nervous about revealing this to his mom. He knew that people believed that being queer was not accepted by God, and there were ongoing efforts to limit transgender rights in schools.

Nevertheless, he mustered up the courage to speak to his mother while she was getting ready for work one morning. "Mom, I feel like a boy," he said. Jess reassured him that it was customary to question one's identity, but she asked him to wait before making any decisions about transitioning socially or medically. She believed he was too young to understand himself fully and was concerned that he might regret taking testosterone if he started it at such a young age.

Parent's Support and How they Managed the Discrimination

Instead of encouraging him to transition, Jess asked Sid to focus on growing as an individual. The family became active members of a Methodist church, with Jess teaching vacation Bible school and Sid interpreting sign language for services. They attended every Sunday.

Some church members believed homosexuality was a sin, but Sid's parents disagreed. They thought the original meanings of Leviticus and Corinthians had been misinterpreted to justify discrimination. Sid searched for references to trans people in the Bible but couldn't find any. He only heard people say that God doesn't make mistakes, leading him to wonder if God had created him precisely as he was, with gender dysphoria.

Sid had never met another trans person, a trans-Christian, and wasn't sure if his identity was acceptable to God. He tried to suppress his feelings by wearing lipstick and frilly dresses. When a voice inside told him that these costumes were wrong, he didn't know what to do.

In early 2019, when Sid was 15, the United Methodist Church voted to adopt the Traditional Plan, which upheld the church's ban on same-sex marriage. As reported by Hawkeye Report, Some Methodist churches opposed the plan, but the pastor of the Highs' church supported it. A few weeks later, the pastor, a woman, pulled Sid aside and told him that homosexuality was a sin and that he would go to hell if he acted on it.

Sid was terrified, believing that hell was a place of eternal torment. He was also heartbroken, as he trusted that the pastor knew the Bible better than anyone else. When he got home, he broke down in tears and asked his mother if he was going to hell. Jess was deeply saddened to see her kind and compassionate son so distressed. She reassured him that God did not make mistakes and that he was perfect just the way he was.

After the incident with the pastor, the Highs decided not to return to the Methodist church. Jess believed that faith communities could be beneficial, but she didn't want her children to have their views of God distorted by others. She had also experienced criticism from the pastor, such as when she was told that her tattoos were "scratches from the devil," and she didn't want her kids to endure similar judgment.

Sid felt guilty about leaving the church, as his sister Ava had many friends there and would no longer be able to see them. However, Jess realized that her family needed more spiritual nourishment, not less, to heal. They began discussing God at random moments, such as while cooking or on a hike and delved deeper into topics like Moses and Job.

They also prayed more frequently, with Jess silently praying over clients while styling their hair and Sid praying for sick customers or those who didn't have enough money at the register. They found a God full of love and acceptance through these conversations and prayers. Sid wanted to help others find this same sense of security, so he participated in organizing his town's first-ever Pride celebration that June.

Sid, who was 15 then, organized a family-friendly Pride event at the local library. According to MSN, he booked the space for a few hours on a late morning, arranged for face-painting and button-making booths, and invited a state lawmaker to give the opening address and a drag queen to read a princess book to children. However, conservatives had become increasinglyF hostile towards LGBTQ+ people, and libraries were frequently targeted for hosting events with LGBTQ+ content. As a result, Sid faced backlash and received threatening messages on the drag queen's Facebook page and complaints to the library.

Jess confronted a woman at her salon who planned to boycott the library because of the drag queen's involvement. She tried to have an open and empathetic conversation with the woman, explaining the drag queen's role and reassuring her that there would be no sexualization of children. Despite the tension, the event was attended by over 100 queer people and allies, with a small group of Christian protesters outside. Sid, who was nervous about being rejected by both Christians and LGBTQ+ people because of his identity, didn't mention his faith when he took the microphone, but he prayed that everyone at the event felt the love of God.

By early 2020, Sid had yet to meet any other LGBTQ+ Christians, but the pandemic made it easier for him to connect with like-minded believers. The Highs started watching LGBTQ+-inclusive sermons on YouTube, and Sid discovered Beloved Arise, a Bible study for LGBTQ+ Christian teens, on TikTok.

He began attending Zoom meetings on Tuesday nights to discuss topics like Judas Iscariot and the Samaritan woman at the well with other queer teens. The Samaritan woman was a social outcast who had been married to five men and was living with another man out of wedlock, but Jesus confided in her. This and other stories in the Bible led Sid to realize that God often chose people who had faced struggles or made mistakes.

He also understood that he was right about his identity at 12; he had a male soul and needed to come out as trans again to live an authentic life. Sid, who has autism, wrote a message about his gender dysphoria and transitioning on Google Docs and sent it to his mother and stepfather. They accepted him and made a plan to find good doctors, and Sid changed his Instagram bio to "he/him." He discovered that being his true self brought him closer to God and made his relationships more genuine and fulfilling. He believed it pleased God to embrace his true identity rather than trying to please others.

This fall, the High family discussed a lawsuit filed against Sid's old school district by a group called Parents Defending Education, which opposed a policy to protect transgender students from discrimination. Jess, Sid's mother, commented that humans need to feel that they are worth something and that just one person being positive in their life can change everything. Sid has become an ambassador for an LGBTQ Christian group and started a book club for young queer Christians; he has also been offering advice to young trans people. He created a Google form and has received many responses from kids seeking advice.

Sid has been offering advice to other young LGBTQ+ people who reach out to him through a Google form. He receives many requests for advice on book recommendations, how to appear more masculine, and dealing with unsupportive parents. One young woman's parents had told her she was going to hell for wanting to marry her girlfriend someday. In his response, Sid shared a verse from the book of Romans about how nothing can separate us from God's love and assured her that God still loves and supports her. When he's not responding to these messages, Sid is working on starting a book club for young queer Christians and serving as an ambassador for an LGBTQ+ Christian group he discovered on TikTok.

Related Article: God Loves LGBTQ People - And We Should Love Them The Way He Does, Too