Data from the Federal Bureau of Investigation show that hate crimes have skyrocketed to 11,000 victims in 2020.

One America News Network reported that federal data showed 2020 as having the highest number of hate crimes recorded since two years ago. OANN said the Federal Bureau of Investigation released on Monday, October 25, 2021, an amended statistics for the 2020 that highlighted 11,000 victims of hate crimes for the said year.

The data comes from reports submitted by 15,136 law enforcement agencies from across the United States involving more than 8,000 criminal offenses caused by sexual orientation, ethnicity, and religion. The report said that more than half or 62% of the hate crimes were linked to a victim's race. The data reveals the highest incident of recorded hate crimes since 2001.

"#HateCrimes are on the rise. In 2020, there were 7,554 single-bias incidents involving 10,528 victims, according to the @FBI Hate Crime Statistics," the US Attorney of Nevada tweeted on September 14.

According to the FBI, the "Hate Crime Statistics, 2020" is a result of their Uniform Crime Reporting Program and does not include estimate offenses of agencies that did not submit a report on the hate crimes. The FBI has several categories for hate crimes: those against persons, against property, and against society. It also classifies the crimes according to its "known offender," meaning according to the ethnicity and age of the perpetrator of the crime.

The FBI data showed that there are 7,426 hate crimes against persons, 2,913 against property, and 193 against society recorded in 2020. The FBI explained that crimes against society are normally done in contradiction to a certain type of activity such as gambling, drug violations, and prostitution that they "are typically victimless crimes in which property is not the object." 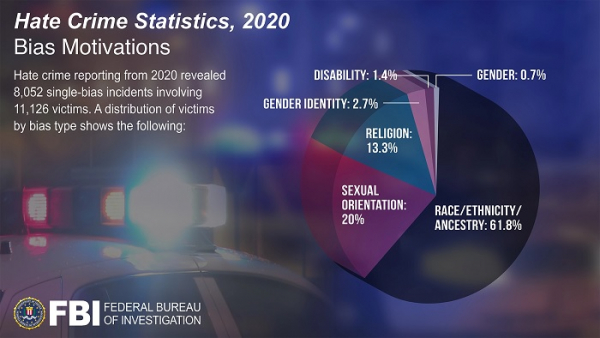 Of the hate crimes against persons recorded for the said year, 53.4% were due to intimidation, 27.6% was classified as simple assault, and 18.1% as aggravated assaults. There were actually 19 rape cases and 22 murders reported as hate crimes. While 27 hate crime offenses were placed "in the category of other."

While 76.4% of the crimes against property involved either vandalism, destruction, or damages. The remaining 23.6% of hate crimes on property involved other offenses, arson, motor vehicle theft, larceny-theft, burglary, and robbery.

The data also detailed that 55.2% of the 6,431 known offenders were White and 20.2% were Black or African Americans, 1.1% were Asian, 1.1% were American Indian or Alaskan Native, and 0.5% were Other Pacific Islander or Native Hawaiian. There was a 5.6% recorded known offenders that belonged to a group of multiple races based on the reports submitted and a 16.4% recorded of an unknown race.

Additionally, the data also pointed out that "5,820 known offenders for whom ethnicity was reported." The statistics showed, of these, 39.3% were Latino or Not Hispanic, 10.7% were Latino or Hispanic, 2.5% from multiple ethnicities, and 47.5% were unknown. The ages of 5,915 known offenders were indicated in the submitted reports, showing that a majority of the hate crimes or 89.1% were inflicted by persons aged 18 and above.

The Federal Bureau of Investigation said through its Criminal Justice Information Services Division Assistant Director Michael Christman that the data reflects a "full picture" of what is happening in the country and pointed out that it would help the police do better at their jobs.

"I'm aware of the number of agencies that have submitted zero incidents again and again. It is certainly a priority for us to develop innovative and creative ways to really get better at obtaining this data so that we can have a full picture of hate crimes in the United States, and certainly accountability and transparency. And I think better policing will be the result," Christman said.