Finally, Stands on the Podium!

The Pandemic. Tokyo 2020 Olympics. Simone Biles. The greatest gymnast of all-time. The gymnast who made a decision that rocked the world. The unexpected decision to withdraw from the most-popular and televised Olympic event, all-around gymnastics. Some say that she quit, some say that she made the right decision. One says, that she is the “true goat” that allowed her team mates to fulfill their dreams. Suni Lee’s father, John Lee, says to “TODAY” in an interview, “...I want to tell Simone that she is truly the GOAT because she let my baby girl bring me a gold medal.” Many Americans and media expected her to return as the “goat” to bring home more gold medals. Her decision was based on either fulfilling the expectations of people and media for the gold or for her own health, well-being, and safety. This is the battle in the mind of Biles-to stand with a gold medal for spectators or to stand in honesty and integrity facing truth and reality, in which today’s leaders, ministers, and doctors need to recognize.

Many Americans, Olympic spectators, and especially media were eager to witness Biles to win the Olympics again, as she did in 2016 Rio Olympics, to make history. They desired to see more of her on the podium with the gold. Some say that she “quit” and disappointed her country, her supporters/sponsors, and team mates. So much weight and publicity that brought the whole world on her shoulders to win gold for the second time built a small niche of mental stress. Biles posted on her Instagram, “I truly do feel like I have the weight of the world on my shoulders at times.” An article places responsibility on NBC for building up this stress to win for America that brought her to a “mental” condition. This “mental” condition can cause serious stress or disconnect between the mind and body. If a gymnast is not in check, then the whole balance of well-being is not there. The mind and body are not in sync that causes serious consequences.

Many say that she stood strong and made the right decision for the sake of the team and for herself. Gymnasts who attempted to continue with this same condition (“twisties”) ended up hospitalized and paralyzed for life. No one, but herself and gymnasts know what was truly happening inside her mind and body. Both mind and body were not connected while vaulting in mid-air, not knowing where her body is and where or how she will land. This is most dangerous condition that gymnasts face and risk their lives. Biles stands true to herself and was honest in what she was facing when she finally made the decision with the advice and counsel of her coach and team. She did not make the decision on her own, but sought honest counsel for her situation. Her first event on vault did not seem like a “serious mishap” in her performance. She was actually experiencing the “twisties” within any gymnast that mentally “blocks” one’s awareness of his/her body in the air and loses control of his/her dismount.

This condition is found in gymnasts, but also, we can witness something similar within ministers, leaders, and doctors. The mind, body, and spirit are not balanced. They are not whole and do not take care of their own well-being. Leaders and ministers state or preach one thing but their body behaves differently. They end up not walking the talk or do not practice what they preach. The consequences are not as physically dangerous, however, it is dangerous to oneself and to others that consequences are either kept secret or made public. Are we as leaders, ministers, doctors, and all who have some role in leadership-are we honest with ourselves, with God, and with others in our condition? Do we have the same courage as Simone Biles to say, “I am not okay, today,” or “I need to step down and take a break to take care of myself.” Or do we suppress what we feel-stress, burden, and fatigue to move forward within our role to minister to others. Are we allowing God, through His Son, Jesus Christ to minister and touch our lives to be made whole first? This not only endangers us but those who are listening and watching every move we make. Are being honest with God, ourselves, and others? In John 8:31-32 (NIV), “Jesus said, ‘If you hold to My teaching, you are really My disciples. Then you will know the truth, and the truth will set you free.’” This challenges the world of leaders, ministers, and even doctors. According MEDPage Today’s KevinMD, “Approximately, one doctor completes suicide each day in the United States......Despite the intense pressure of medical practice, the culture of medicine does not appear to be as forgiving as the world of sports.”

For instance, our first generation ministers who work incessantly to fulfill the work of God’s Kingdom, there is a sense of urgency to advance God’s Kingdom, but if it is for one’s fame or gaining finance means can bring a great toll on that person and others. If we are doing ministry by ourselves, by our own wisdom, by our own strength, and for our own gain, and not for Jesus, it is time for us to surrender. To admit that we are human and that we cannot do it on our own strength. It is the moment when we realize that we are only humans and that we experience our own limitations. This is the moment to surrender to our Lord and Savior, Jesus Christ-so that He can fulfill HIS WILL in our lives through the living Presence of the Holy Spirit, who moves and guides us, the same dunamis (“power” in Greek) that resurrected Jesus Christ from the dead and to give us new life to live for HIM! Once you surrender your heart and soul to Him through the conviction of the Holy Spirit-will give you true peace, joy, and love-bearing the “Fruit of the Spirit” in Galatians 6:22-23. 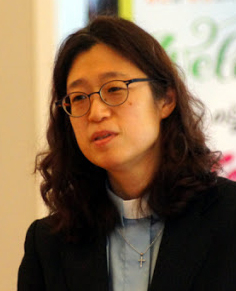 Biles was honest to herself and truthful to others. She knows how to asses herself and the her situation to make a wise and right decision for the sake not only for herself, but for her team mates and the world. She did not wish to jeopardize her team for losing a medal due to her performance but to step back and allow the next generation to move forward, execute, and fulfill their dreams. This reminds me of the time when John the Baptist says (John 3:30), “...He must increase, I must decrease.” Through true humility of knowing one self and limitations -builds true character and integrity to stand for what is right and true even through there will be adversity and “moving against the grain” or moving against the “main stream.” Biles stands not only as a true Olympian, but the one who stands for truth, honesty, and integrity to take the courage to step down because “she is not okay today” to do the same tasks that she has been doing hundreds of times over the years to perfection with greatness while her jumps are named after her because she is the only one who can execute them. She was not afraid to step down and say that she needs to take care of herself while the whole world was watching. She is the voice that speaks honesty of her heart, feelings, and soul. She is well and safe today filled with smiles cheering for her team mates because she was honest with her feelings, body, and mind. Finally on Tuesday, August 3, 2021, she stands on the podium with the bronze medal for the individual balance beam!

A Decision. A decision made by Simone Biles. The decision that shook the world, opened doors to mental well-being and wholeness (in Hebrew, “shalom” or peace). She knew her limitations and that she is human. A moment she steps down, so her team steps up. An example for the world to be strong and courageous. Let us share that same courage to “Be true, be real, be human.”

“Be strong and courageous. Do not be afraid; do not be discouraged, for the LORD your GOD will be with you wherever you go.” (Joshua 1:9)