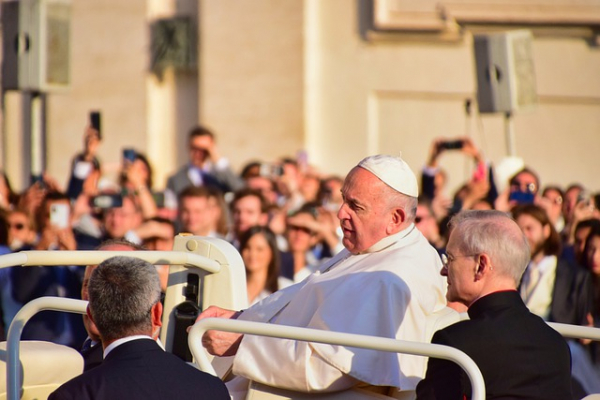 Pope Francis tackled a new series of catecheses on apostolic zeal during his weekly General Audience, emphasizing how the Church was founded on missionary zeal and urged all to pray for peace in Ukraine and end the ongoing suffering.

The New Series of Catecheses

Pope Francis addressed the audience, highlighting the importance of apostolic zeal in Christian life and its vital dimension for the Church. According to the Vatican, He emphasized that the community of Jesus' disciples is born apostolic and a missionary, not proselytizing. Francis quotes this from the late Pope Benedict XVI.

He distinguished the difference between being a missionary, apostolic and evangelizing, and proselytizing, and warned that when Christian life loses the ability to see the horizon of evangelization, it becomes closed in on itself, self-referential and atrophied.

He also noted that without apostolic zeal, faith withers, and mission is the oxygen of Christian life. He urged the audience to embark on a process of rediscovering the evangelizing passion and to draw apostolic zeal from the scriptures and Church's teaching, and also to approach some living sources, some witnesses who have rekindled the love for the Gospel in the Church to help revitalize the fire that the Holy Spirit wants to keep burning within us.

In an article in Vatican News, Pope Francis encouraged the audience to embark on a journey of rediscovering a passion for evangelization by studying the Scriptures and the Church's living tradition and looking at the examples of witnesses who have rekindled the love for the Gospel in the Church.

He began by discussing the Gospel episode of the call of the Apostle Matthew, using it as an example of Jesus' mercy in calling Matthew to be his disciple, despite his profession as a tax collector for the Roman empire, which at that time would have been seen as a collaborator or traitor of the people. The Pope explained that Jesus' actions show that God loves every person.

He mentions Pope Benedict's teachings about looking at Jesus Christ with faith and shares a story about a group of Korean women religious who ran a hospital in Buenos Aires and how their gaze communicated Jesus.

Pope Francis also points out that Christians should look beyond people's labels and reach out to those who seem far off. He also emphasizes that it is essential for Christians to go out and seek others instead of waiting for people to find them. He ends the audience by inviting people to pray with him in silence for peace in Belarus. He also placed a Marian icon on stage, which is revered in the country.