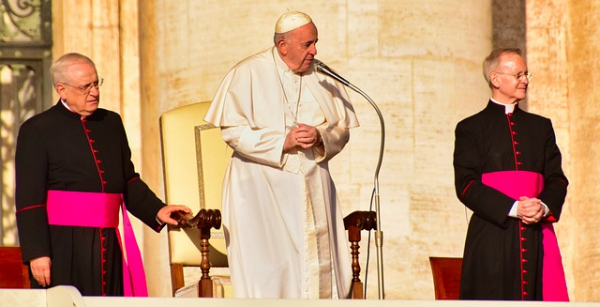 Pope Francis delivered a sermon on Sunday, which has sparked speculation that he may consider abdicating from his position as Pope. He spoke about stepping aside at the right time and learning to take one's leave.

Pope Francis has previously stated that he would resign if his health deteriorated, but he has dismissed other speculation about his potential resignation. In his address, Pope Francis said that it is easy to get attached to roles and positions and to seek recognition and rewards.

In an article published last year in Christianity Daily, Pope Francis revealed that he has a letter of resignation drafted and signed in case of permanent impairment. He stated that previous pontiffs, Paul VI and Pius XII, also composed such letters. He signed the letter and gave it to the then-Secretary of State Tarcisio Bertone but needs to know where Bertone may have put it.

He encouraged the public to ask Bertone for the letter and mentioned it might have been handed over to the current Vatican Secretary, Cardinal Pietro Parolin. He also stated that he did not look into a written law about resignation as the matter rarely occurred and that he believes it is not the will of the Holy Spirit for him to be concerned about it.

According to Smithsonian Magazine, A few popes in history have resigned for various reasons, primarily unexplained and personal, and some are anomalies within the organization. One example is Pope John XVIII, who withdrew to a monastery after his pontificate was over; he had ties to the influential Roman family, the Crescentii.

Pope Celestine V is another example; he wrote a decree allowing popes to resign after only five months in the role before leaving himself

Pope Benedict XVI, Francis' immediate predecessor, who has recently passed away, resigned in 2013, citing "advanced age" as the reason. It has been roughly 600 years since a Pope left before his death; the last one to do so was Gregory XII in 1415 to end a civil war in which multiple people claimed to be the church's leader.

Pope Francis Reflects on the Virtue of Setting Oneself Aside, Denies Plans to Resign

In the report in Daily Mail, Pope Francis spoke during a Sunday Angelus, a regular prayer led by the Pope, where he reflected on the virtue of setting ourselves aside at the right moment, bearing witness that the point of reference of life is Jesus.

He emphasized the importance of learning to step aside, not to take something for ourselves in recompense. He also said that It is suitable for us too to cultivate, like Saint John the Baptist, the virtue of setting ourselves aside at the right moment.

The Pope was under pressure from conservative factions of the church who saw him as more liberal than his predecessor. According to The Telegraph, it was unlikely Pope Francis would step down. At the same time, Pope Benedict XVI was alive to avoid an unprecedented situation where three Popes were living in the Vatican at one time, but Pope Benedict XVI died on New Year's Eve, 2022.

A report on CNN stated that Pope Francis had denied reports that he plans to resign soon. He said he plans to visit Canada this month and hopes to visit Moscow and Kyiv as quickly as possible. In an interview with Reuters, he also denied rumors that he has cancer and joked that his doctors did not tell him about it. Furthermore, he gave details for the first time about a knee condition that has prevented him from carrying out some of his duties as Pope.

Related Article: Pope Francis Reveals He Has Signed a Resignation Letter Due to Potential Health Issues