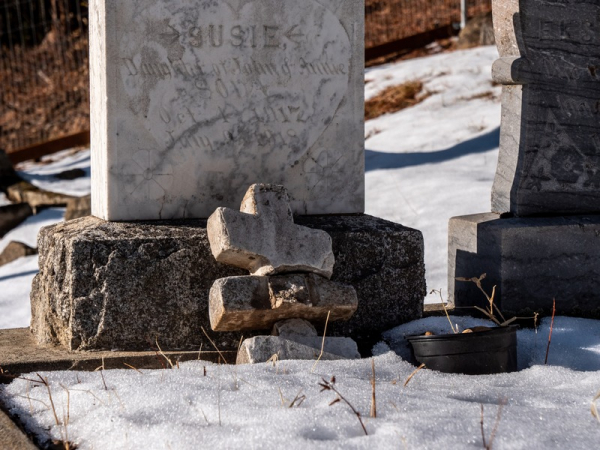 On Sunday, a Christian cemetery in Jerusalem was vandalized, with more than 30 graves being damaged. Crosses were removed, and headstones were broken. The Church of England and Israel's foreign ministry condemned the incident.

Over two dozen were severely damaged. Some of the graves belonged to prominent Christian figures. The cemetery, known as the Protestant Cemetery on Mount Zion, was left in ruins with broken headstones and crushed crosses. The destruction caused outrage and condemnation from leaders and community members.

According to Christian Today, security footage from the Christian cemetery in Jerusalem that was vandalized shows two young men wearing kippahs and tzitzit committing the attack. According to authorities, these wardrobe choices suggest that the perpetrators were religious Jews.

Among the vandalized graves was that of the second Anglican Bishop of Jerusalem, Samuel Gobat, a prominent figure who had purchased the land where the cemetery was later established in 1848. The Anglican Church believes that the vandalism was driven by "religious bigotry and hatred against Christians."

Anglican Archbishop Hosam Naoum told the BBC that the vandalism of the Christian cemetery in Jerusalem is a sign that "people can tolerate each other or accept each other." He added that there is "more exclusion, more segregation" in the city and that this "really grieves us."

The British consulate in Jerusalem also condemned the attack on Twitter, stating that it is the latest in a series of attacks to Christians and their property in the Old City. Justin Welby, the Archbishop of Canterbury, referred to the vandalism as a "blasphemous act" and expressed hope that those responsible would be accountable.

The Israeli Ministry of Foreign Affairs also condemned the vandalism, calling it an "immoral act" and saying that the perpetrators should be prosecuted. The U.K.'s Chief Rabbi Ephraim Mirvis described the vandalism as "shameful" and "disgraceful" and called for the perpetrators to be found and prosecuted. This is not the first time that the cemetery has been vandalized.

According to a report in NBC News, Israeli police arrested two teenagers for vandalizing over two dozen Christian graves at the Protestant Cemetery on Mount Zion in Jerusalem earlier this week. The cemetery, which is over 170 years old and houses prominent members of the armed forces and clergy, was found to have graves pushed over and pulled from their foundations on Sunday, causing concern among the Christian minority in the city and drawing worldwide condemnation.

The U.S. Embassy's Office of Palestinian Affairs expressed concern over targeting the religious site, stating that "religious site vandalism by anyone is unacceptable" and that Jerusalem should be "a city for all of its people." This is the second time the cemetery has been vandalized in a decade.