The Jack Dorsey-led company has permanently disabled President Donald Trump's personal Twitter account because, as the internet giant said, he poses a "risk of further incitement of violence," One America News Network reported. 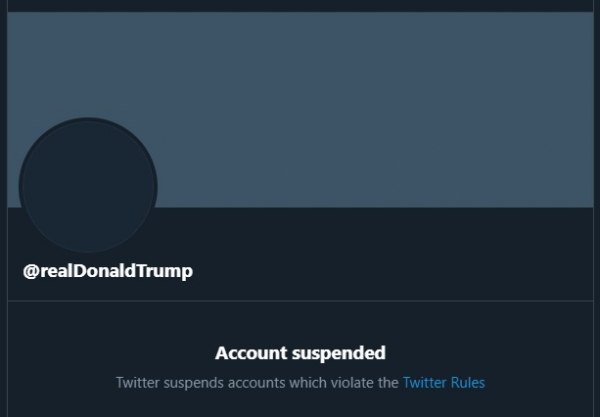 The permanent ban comes after Twitter said it ran a "close review" of the President's "recent Tweets." These recent Tweets would've likely included calls for peace and requests for his supporters to go home amid the riots that were allegedly incited by leftists who infiltrated the throngs of Trump supporters in Capitol Hill.

Apparently, Twitter found the President's calls for peace, alongside tweets calling out the voter fraud that happened in the 2020 Presidential elections, as capable of "incitement to violence."

Some high-profile personalities voiced out their disappointment, to say the least, at what Twitter did.

Former U.S. Ambassador to the United Nations Nikki Haley pointed out that this kind of censorship is what happens in a communist country like China, not in a democratic and freedom-loving nation like the United States of America:

Silencing people, not to mention the President of the US, is what happens in China not our country. #Unbelievable

Donald Trump Jr., also hit Twitter for attacking the head of state's right to free speech, and pointed out that America seems to be in another time: that of George Orwell's 1984:

We are living Orwell's 1984. Free-speech no longer exists in America. It died with big tech and what's left is only there for a chosen few. This is absolute insanity! https://t.co/s2z8ymFsLX — Donald Trump Jr. (@DonaldJTrumpJr) January 9, 2021

Now, the Trump Campaign itself is no longer able to send emails to its supporters by way of its email service provider as the provider, Campaign Monitor, has suspended the President's account as well, the Financial Times' Dave Lee reported.

Aside from not being able to send emails, the Trump Campaign, as well as its digital director, were also banned from Twitter as well.

Gen. Mike Flynn, who the President pardoned in time for Christmas, was kicked out of Twitter, The Gateway Pundit reported.

Flynn, after being banned from Dorsey's social media platform, took to anti-censorship social media app Parler and posted an encouraging message for all Americans:

"America fought a good fight. Our great Country is resilient & we will get thru this difficult time. Acting responsibly at this moment is what all Americans must do. During the past 4 tough years, I found faith, family and true friends were my foundation," Flynn wrote as per TGP. "God Bless America."

Trump lawyer Sidney Powell, known for her efforts at revealing the cheating done in the U.S. Presidential elections, particularly those involving the voting machines that were used and the companies that were associated with them, was also banned from Twitter.

Lin Wood, who also worked to reveal details regarding what the President referred to as the "swamp," was kicked out of the platform the day after the protests in Capitol Hill. Stop the Steal organizers Ali Alexander and Michael Coudrey themselves were banned on the evening after the protest.

The #WalkAway Campaign, a grassroots movement that encourages people on the Left to leave and "walk away" from the Democrat Party's divisive agenda, was also booted out of Facebook.

The movement, founded by former liberal Brandon Straka, already had more than half a million testimonies from former Democrats, each of them containing reasons why they left the party.

Straka reached out to TGP for help and explained that according to the social media company, their account was banned for violating its "Terms Of Use." It's unclear what violation the group committed, however.