Christians Are Now Being Targeted For ‘Polite Persecution’, Report Says

Secularism, as a culture, is increasingly becoming hostile to Christianity in the West.

The 2021 report on Religious Freedom in the World released by Aid to the Church in Need (ACN) reveals that there has been a rise in "political persecution" in the West. This new category of persecution comes in the form of "restrictive measures encoded in public policy and law" as worded by Bill Donohue, president of the Catholic League.

This "polite persecution," according to ACN, cloaks itself as a progressive or "enlightened" secularism.

Donohue also contends that these subtle attacks against the faithful "may not be as immediate or acute, but they can be culturally lethal." This echo "the quiet obscurity of the individual conscience" stated by Pope Francis who is similarly concerned about how the new cultural norms and values are making it more difficult for people of faith to have a voice in the public square. 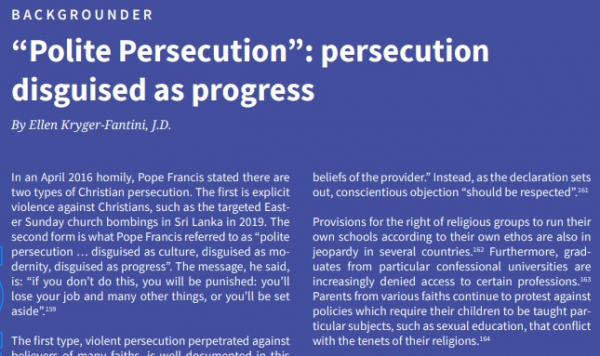 Polite Persecution, as explained in the ACN's report. (A screengrabbed image from page 38 of the report)

WND noted that the Pope mentioned about "healthy pluralism" in his apostolic exhortation "Evangelii Gaudium" ("The Joy of the Gospel"). This kind of pluralism champions respect of differences and values by not "privatizing religions" or not relegating them to "the enclosed precincts of churches, synagogues or mosques." To do so would "represent, in effect, a new form of discrimination and authoritarianism."

Things brings Christians to their present dilemma where a belief on traditional values is criminalized through legislation in the guise of promoting "equality." This is done through the broadening of the definition of "hate" and by reducing moral or religious conviction to "conservatism" which, to the secularist's mind, is outdated and obsolete. This mindset that's becoming more prevalent in public affects all Christians in general.

Another alarming issue is the politicization in the education system. Concerned parents who would air their objections against particular subjects like sex education are constantly ignored by school administrators.

Other examples mentioned in the report include the following:

"Polite persecution' of religion may not put us in imminent danger, but in the long run, it can accomplish the same end," Donohue commented.

Donohue also argued that starting or supporting campaigns to subvert the aforementioned should be in the interest of everyone that value religious freedom.

Reflecting on their findings, ACN International President Dr. Thomas Heine-Geldern said that to date, "the international community's response to violence based on religion and religious persecution in general can be categorized as too little, too late."

Heine-Geldern's observation could not be more clearer in the complacent attitudes of Western governments toward religious organizations. The recent scandals involving high-profile Christians have also complicated the fight for religious tolerance.

For the complete report on religious freedom in the world, click here.