FDA Knew What The COVID Vaccine’s Side Effects Were Before It Became Available, But Approved It Anyway

Despite approving COVID-19 vaccines for public use, an FDA presentation from October of 2020 reveals the agency was fully aware of the drugs' potentially harmful side effects, a report reveals.

"Just because the vaccine has the FDA's blessing, doesn't necessarily mean the experimental drug is safe. Thousands of doctors around the world have reported adverse effects from the vaccine," One America News Network's Pearson Sharp warned. "Most are mild and include muscle soreness or headaches. However, there are others which are quite severe and even fatal."

"In fact, on August 26, former BBC presenter Lisa Shaw died from a brain hemorrhage which the coroner says was directly caused by the AstraZeneca COVID vaccine," Sharp added.

"Doctors who have spoken to One America News say they treated fully vaccinated patients suffering from a range of side effects, including Guillain-Barre syndrome, anaphylaxis, myocarditis and pericarditis, potentially fatal swelling of the heart muscle mostly in children, stroke, and lymphatic apathy or swelling of the lymph nodes to name a few."

Sharp claims that despite the more recent reports on these side effects, the FDA actually had been aware of them since before the drug was made available for public consumption. He claims that the FDA knew all of the side effects as early as October 2020. He pointed to a public video posted to the U.S. FDA YouTube channel titled "Vaccines and Related Biological Products Advisory Committee - 10/22/2020," which he described as "nine hours of tedious rambling from numerous presenters discussing various aspects of the vaccine."

Sharp pointed out that during a presentation, Dr. Steven Anderson, the director at the FDA's office of biostatistics and epidemiology, is speaking about COVID vaccines and swiftly glossed over for significantly less than one second a slide that enumerated a "draft working list of possible adverse event outcomes," which slide featured a long list of side effects. 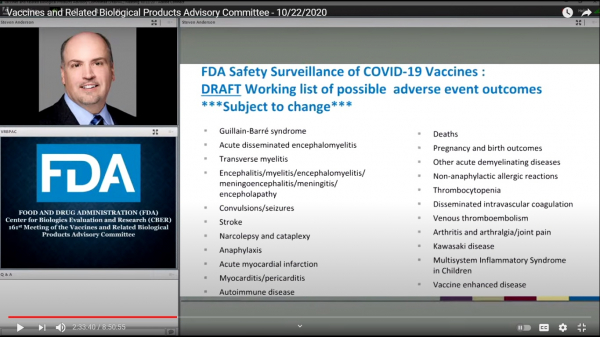 Sharp criticized how Dr. Anderson spent 20 minutes on his discussion but in the middle of his presentation, skips over the slide discussing the COVID vaccine side effects listed above. He continued to underscore that these were the very same side effects being reported by thousands of people across the world who got the COVID vaccine.

The FDA themselves even added a warning to patient and provider fact sheets for the Pfizer and Moderna COVID vaccines in June to indicate a rare risk of heart inflammation.

According to CNBC, the fact sheets for the Pfizer and Moderna shots were revised to include a warning about myocarditis and pericarditis after the jab's second dose. But acting FDA commissioner Janet Woodcock maintained, "The risk of myocarditis and pericarditis appears to be very low given the number of vaccine doses that have been administered. The benefits of Covid-19 vaccination continue to outweigh the risks, given the risk of Covid-19 diseases and related, potentially severe, complications."

The nine-hour-long presentation by the FDA can be seen below. The slide that was quickly glossed over can be seen at the 2:33:40 mark.