Madison Prewett On Bringing Glory To God: How ‘The Bachelor’ Star Brought Jesus To People Through Show

Former "Bachelor" contestant Madison Prewett shared about her upcoming book, encouraging people to stand up for God and live in accordance to their calling.

Prewett, who appeared in the show's 24th season and had a brief relationship with "Bachelor" star Peter Weber, is set to release Made For This Moment: Standing Firm with Strength, Grace, and Courage next month. It tells about preparing and overcoming the challenges to reach one's destiny.

Speaking to The Christian Post, she said that the book is "one of the coolest things" to share that God can use her and "The Bachelor" show "to bring glory to His name."

She added that she never expected to be used by God through the show.

"I think my whole life I just imagined, 'God shows up on mission trips, God shows up in churches, God shows up in the confinements of a home.' But I never would have imagined that God would use somebody like me and something like 'The Bachelor,' something so secular, to make His name known."

Though her relationship with Weber did not turn out well, she believes that her participation in the series was meant to encourage everyone.

"I learned so much through it. I feel like a lot of the girls on the show were so encouraged and a lot of them, honestly, have come to know Jesus through it. So many girls have given their heart to Jesus and girls who have decided to wait until marriage, just hearing me talk about my decision... We're all called to step out in faith and sometimes it doesn't look like what we thought."

She disclosed that the book tackles about a person's character, staying true to convictions amidst pressure and temptation, as well as whether being watched or not.

She explained that people will see who a person truly is when pressure emerges. Thus, she advised that one must understand herself while no one is looking and figure it out alone with God.

To avoid resentment and shame, Prewett said that preparation is necessary in dealing with pressure. With this, a person will be able to gain a life that she can be proud of, under God's calling and "in step with the spirit."

Prewett uncovered that she was initially hesitant to join the show, noting that people were mocking Christianity and individuals who stood for it were made to appear foolish.

"And time and time again, the Lord was chasing me down, like 'this is where I need you.' So I was like, 'OK, Lord, I'm going to trust you, and I'm going to follow whatever it looks like,'" she continued.

In her personal life, she observed that a blessing follows after she obeys, adding that one may not always understand the reason but by trusting and obeying the Lord, a person will experience the move of God in and through her life.

The book features the principles of Esther's story in the Bible, wherein one must stand firm with her convictions regardless of its cost - a move that helps a person gain a lot through the process and save people. 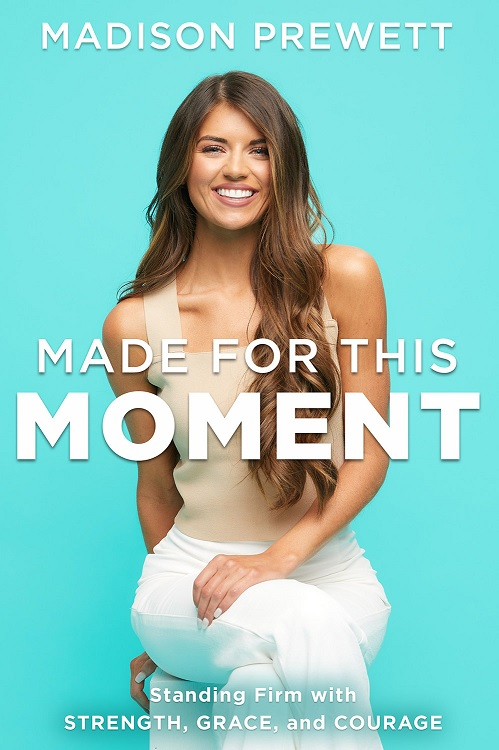 Former "The Bachelor" contestant Madison Prewett's new book, "Made For This Moment: Standing Firm with Strength, Grace, and Courage." (madiprew.com)

Further, she said that she wants to see "modern Esthers" who will show their true selves according to God's calling, walking firmly in confidence, conviction and courage.

In conclusion, she expressed her hope that through her book, people will rise up for the Gospel and live their purpose.

"I just saw this vision of Esthers being awoken. It's time for people to rise up to be unashamed of the Gospel, to be honest of their convictions and beliefs, and to walk out the person that God has called them to be and to make a difference."

Prewett studied pastoral leadership at Highlands College. She also earned a degree in mass communication and media studies at Alabama University in 2018.