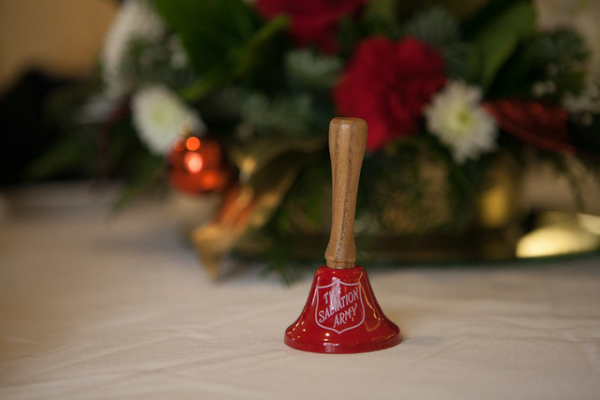 This week, a photo of Tony Dungy went viral on social media. In the photo, Dungy is seen working as a bell ringer for the Salvation Army. A passerby snapped the picture of the former NFL coach and current NBC analyst standing in front of a local grocery store.

The photo quickly gained attention and was shared widely online, leading many to learn about Dungy's quiet volunteer work for the Salvation Army.

According to Dr. Bruce L. Hartman, every year, the Salvation Army recruits volunteers to stand in front of grocery stores and on street corners and ring a bell to collect donations in their iconic red kettles. This fundraising campaign takes place from late November until Christmas.

This year, thousands of volunteers, including over 1,000 in New York City, have participated in the campaign. The donations collected through this campaign support the Salvation Army's programs to help feed the poor and assist families in need. Millions of dollars are raised through this campaign each year, and it is a critical source of funding for the Salvation Army's charitable efforts.

Also Read: Tips for Christians Planning to Donate to Charities

The photo, which a passerby took, shows Dungy wearing a red Santa hat and ringing a bell in front of a Publix grocery store as a Red Kettle volunteer. Dungy was unaware that his picture was being taken at the time. Jay Feely, a CBS Sports football analyst, shared the photo on Twitter, and it quickly gained attention, receiving almost 50,000 likes. In his tweet, Feely praised Dungy for his charitable work and described him as a "servant leader."

Tony Dungy won a Super Bowl as HC
Played in the NFL
Works as a studio analyst on NBC
But I respect him as a man more than anything he has done in football.
Here he is (without any fanfare) quietly volunteereing with The Salvation Army at the local grocery store-Servant leader pic.twitter.com/A5749xojsM

Tony Dungy's volunteer work as a bell ringer for the Salvation Army was met with widespread praise on social media. Many people praised him for his charitable work and described him as a good person and a class act. Some even referred to him as a living legend and praised him for his humility, thoughtfulness, and insight. It seems that Dungy is no stranger to volunteering for the Salvation Army.

On December 7th, he even posted a photo of his family volunteering at a local Publix Red Kettle and invited others to come and make a donation to support those in need during the holiday season. In his tweet, he mentioned that he and his family would be at the Publix in North Tampa that evening, ringing bells and encouraging people to donate to the Salvation Army.

We are out ringing bells for the Salvation Army Red Kettle at the Publix at the Apex in North Tampa. If you’re close come by and see us tonight and make a holiday donation for the needy! pic.twitter.com/Sp1Tvnnvek — Tony Dungy (@TonyDungy) December 7, 2022

Last 2020, he told the WFLA that the Salvation Army needs the community's help. As stated in the report of Christian Headlines, "This time of year, it always goes through your mind, who is taking care of the people who can't take care of themselves," Tony stated. "Our kids have great Christmases, but a lot of people don't, and the Salvation Army is huge in providing for them."

Related Article: Former Nickelodeon Star-turned-Youth Pastor Kel Mitchell Says He 'Wants God in Everything He Does'