Regular Church Attendance Declines, But Belief in God Persists Despite the Growth of Megachurches 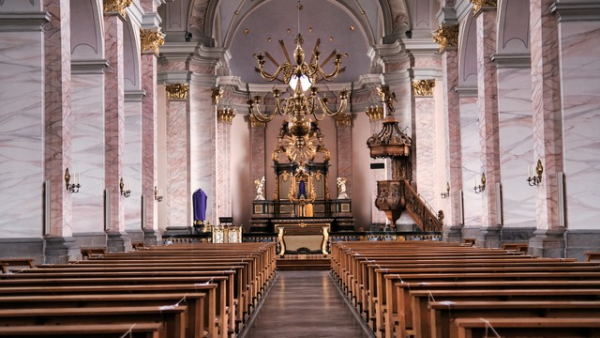 According to survey data, church membership, attendance, and belief in God declined during the pandemic years. These declines are part of longer-term trends of people moving away from organized worship.

At least one-fifth of Americans today do not identify with any religion, and a similar share say they do not believe in God. These trends contrast with a steep rise in the number of nondenominational Protestants or those who attend churches outside of the "mainline" denominations, such as Baptists, Methodists, and Lutherans.

Nondenominational Protestants have become the majority, signaling a shift towards churches and clergy that are not tied to traditional religious structures.

According to an ABC News analysis, in-person church attendance declined by 45% during the pandemic. While many churches have reopened, not all congregants have returned. Thomas Groome, a professor of theology and religious education at Boston College, suggested that people stay home and turn to technology for social interaction rather than gathering in person.

Surveys conducted by Gallup also showed that church membership in the United States dipped below 50% in 2020, reaching a historic low. Church membership had been relatively stable at around 70% of the population from the 1940s through the 1990s but has declined significantly in the new millennium.

The decline in church attendance and belief in God has been driven partly by a growing number of "nones," or Americans who do not identify with any particular religion. According to Gallup, the percentage of "nones" in the US is currently 21%.

While it is tempting to assume that "nones" do not believe in God, a Pew analysis found that many "nones" still consider religion necessary. David Campbell, a political scientist at the University of Notre Dame, notes in a report in Changing America, that "somebody who has no religious affiliation, they may well value religion...and they may well believe in God."

Belief in God was once almost universal in the US and has been tied to American identity and currency. However, in recent decades, religion has become more politicized and associated with certain political parties, leading to a decline in church attendance among Democrats and those on the left.

Younger Generations Are Getting Less Religious

As cited by American Survey Center, polls conducted by Gallup show that younger generations are generally less religious than older ones. For example, 34% of Generation Z identifies as "nones" (those who do not identify with any particular religion), compared to 29% of Millennials and 25% of Generation X. This difference can be partially explained by the fact that older people tend to be more religious as they age and have families, and may also be influenced by their belief in an afterlife. However, the spiritual disconnect among younger people may also be driven by political divisions, particularly on issues such as LGBTQ rights and abortion, which conservative religious organizations often oppose.

Mainline Protestantism, which includes denominations such as Baptists and Methodists, has declined since the 1970s, with the share of Americans identifying as such dropping from over 30% to around 10%. In contrast, the number of nondenominational Protestants has grown significantly.

According to the 2020 US Religion Census, 6.5 million more nondenominational congregants and thousands more churches are in this category compared to 2010. Nondenominational churches, which often started as small groups led by individuals in their homes, now make up the largest Protestant denomination in the US, with more than 13% of churchgoers.

These churches often attract people skeptical of traditional institutions and do not require membership or have membership roles, making them more transitory.