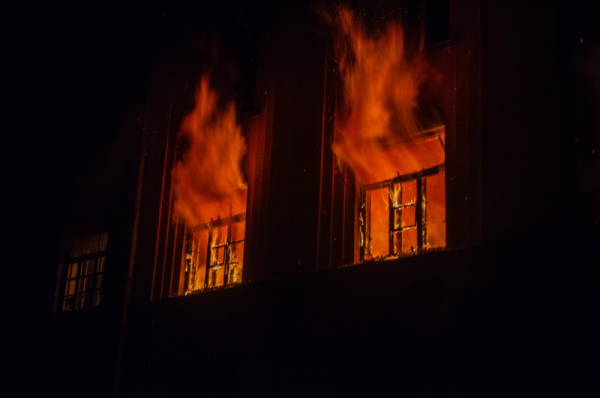 On New Year's Eve, a fire broke out at the New Life Bible Church on Hoke Loop Road in Fayetteville. The fire destroyed the church's academy, which was started by Pastor Allen McLauchlin and his wife 25 years ago.

Pastor McLauchlin watched as the flames engulfed the building. Now, he is working to figure out how to get the academy's students ready for school on Monday, despite the significant damage caused by the fire.

According to CBS17, Pastor Allen McLauchlin of New Life Bible Church in Fayetteville was awoken on New Year's Eve by someone knocking on his door to inform him that the church was on fire. When he arrived at the scene, he saw that the fire had destroyed the middle and high school wing of the church's New Life Christian Academy. Pastor McLauchlin watched as firefighters worked through the night to contain the flames. He expressed heartache at the sight of the charred, debris-filled building.

The pastor and his wife started the school 25 years ago and currently have over 100 students. The fire caused significant damage to the academy, including destroying several school projects, desktop computers, and more than 100 iPads. Despite the challenges, Pastor McLauchlin is determined to keep the school open for his students.

He has rush-ordered new schoolbooks and arranged for classes to resume on January 9th at the church's Family Life Center. The pastor has received support from the community, with people and other pastors reaching out to offer assistance and donations.

In the article of WRAL, despite the heartbreak caused by the fire at the New Life Christian Academy at the New Life Bible Church in Fayetteville, Pastor Allen McLauchlin is grateful for the kindness and support he has received from the community.

The pastor said that while many of the items lost in the fire can be replaced, he is thankful that no one was hurt. He is determined to keep the school open and serve over 100 students. The church has insurance, and firefighters are investigating the fire's cause.

While Pastor McLauchlin is not asking for donations, he appreciates any acts of kindness and support from the community. Anyone who would like to help can visit the church's website for more information.

Also Read: AZ Food Pantry Loses 40,000 Pounds Of Food To Fire, Vows To Rebuild Because 'This Is God's Mission'

Other Fires Broke Out on New Year's Eve

In a report by Vancouver Sun, a fire occurred at home on Ormidale Street in East Vancouver on New Year's Eve. Assistant Chief Richard Warnock reported that a 71-year-old man died in the blaze in a bedroom at the time. The other occupant of the home, who called the fire in, was not injured. The home was damaged by heavy smoke and water.

The cause of the fire is currently under investigation by fire investigators. The Vancouver Fire Rescue Services reminded people on Twitter to ensure they have working smoke detectors in their homes and to sleep with closed doors to help prevent fires and increase the chances of safely escaping a fire.

On New Year's Eve, Jacksonville Fire and Rescue responded to two fires caused by fireworks. In one incident, someone accidentally shot a firework into a garage, setting it on fire. In the second case, people disposed of their used fireworks in a garbage can, which they then placed in a garage. According to News4Jax, the fireworks were still hot, and the trash caught fire. Fortunately, no one was hurt in either of these fires. Jacksonville Fire and Rescue also responded to a fire on First Avenue North in Jacksonville Beach early on New Year's Day. When crews arrived, they found one person dead. The cause of that fire is currently unknown.

It is important to be cautious and follow safety guidelines when using fireworks to prevent fires. This includes following all local laws and regulations regarding the use of fireworks, only using fireworks in designated areas away from buildings and flammable materials, and properly disposing of used fireworks. It is also important to have working smoke detectors in your home and to sleep with doors closed to increase the chances of safely escaping a fire.