An election expert revealed last August 3 that there was a whopping 8.1 million excess votes for President Joe Biden during the 2020 Elections, proving that former President Donald Trump actually won the race.

The Gateway Pundit's Jim Hoft reported that retired Army Intelligence Captain Seth Keshel released in his Telegram page during the weekend the final national fraud numbers. The said information is based on his analysis of the final vote counts from all states. Hoft's report was republished via Mike Lindell's platform, Frank Speech.

"Seth Keshel examined the final vote counts in all 50 states compared to the estimated numbers based on changing state dynamics and trends to come up with his estimated voter fraud in each state," Hoft explained.

The map is predominantly green in the middle, surrounded by yellow and red on the outskirts. Some of the "red" states in the map include, Washington, Oregon, and California. While some of the "yellow" states include Arizona, New York, Wisconsin, and New Mexico. 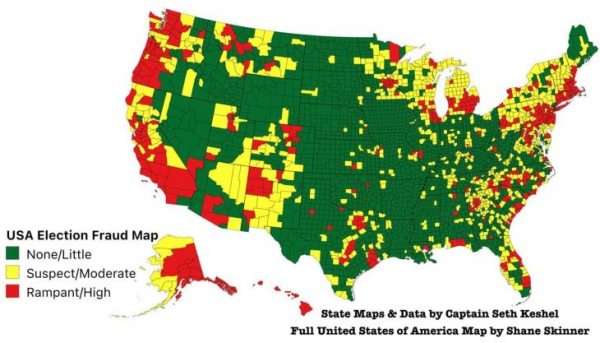 According to Keshel, the data showed Biden "conservatively" received an excess of 8,144,000 votes on record during the elections. The data also revealed that Trump actually won in the swing states of Pennsylvania, Michigan, Wisconsin, and Arizona, as well as in, Georgia, Nevada, and Minnesota.

"Here is a tale of the tape for Excess Biden Votes based on trend analysis in the modern political era, considering population growth/decline, recent voter history, and registration information, including registration by party. My estimates are always lenient, and do not account for cyber flipping of votes," Keshel said before showing a spreadsheet table that enlists each state and the breakdown of excess Biden votes.

The top five states with the most number of excess Biden votes were recorded for Texas at 675,000; Michigan 527,000 Washington 333,000 New Jersey 327,000 Georgia 299,00. While there was none recorded for the District of Columbia and Iowa. The "Revised Biden Vote Total" was recorded at 73,125,000, which is "according to Trend Analysis of Population Growth Voter Behavior and Party Registration."

Keshel pointed out the possibility of Trump winning in the states of New Mexico, Virginia, Colorado, New Jersey, and New Hampshire "if cyber flipping" occured. While the election results recorded for the states of Washington, Oregon, Rhode Island, Connecticut, and Hawaii are "closer than you thought."

Keshel, responding to the bashing he received on the authenticity of his report, pointed out in his Twitter account that he couldn't simply make up the information he released and pointed out his credibility having beein one of the experts who revealed during the 2016 elections that Trump won in Florida by more than 300,000 votes.

A netizen, obviously trying to reject the report, called Keshel a "disgrace" to the "country and" to the "Military" for his spreading "lies and fake numbers about" the "elections" and challenged him to "show proof in court!" To which, Keshel responded the need to "check court records" of the states who also have his analysis.

"Maybe you should check the court records for every single state, which have not only my analysis, but the analysis of many other data minds," Keshel stressed.

President Trump, responding to Capt. Keshel's analysis via Telegram, said "I don't personally know Captain Keshel, but these numbers are overwhelming, election-changing, and according to Keshel, could be even bigger in that they do not account for cyber-flipping of votes."

The former POTUS added that the Democrats can then be expected to "coalesce, defame, threaten, investigate, jail people, and do whatever they have to do to keep the truth from surfacing, and let the Biden Administration continue to get away with destroying our Country."

He added that the fraud that occurred in the recent elections "are an open wound" to the country, saying "Something must be done-immediately!"