Madness: Healthline Says Pregnancy Is Not Only For Women But For Men Too

Healthline, a website under the Healthline Media umbrella that also owns Medical News Today, Greatist, and PsychCentral, has claimed in one of its published materials that "Yes, it's possible for men to become pregnant and give birth to children of their own."

This is a shocking revelation from a company that said it is "committed to providing every individual with clear, credible, evidence-based health and wellness information that's distinguished by its compassion for the human experience."

The first part of that statement is what health websites are supposed to be: sources of "clear, credible, evidence-based health and wellness information." But the latter part of its mission statement is evidence that Healthline may be pandering to the transgenderism ideologies of the left. The media company says it offers information that is "distinguished by its compassion for the human experience," which means compassion for those who are not commonly represented in the media, such as those in the LGBT community.

According to Not the Bee, Healthline wrote that pregnancy in men is "probably a lot more common than you might think" but then breaks down some "common misconceptions about how we understand the term 'man,'" by defining assigned male at birth (AMAB) or cisgender men or assigned female at birth (AFAB) or transgender men or basically, a biologically born woman.

Here is where the falsehood lies: AMAB or cisgender men cannot get pregnant because they do not have a uterus and ovaries.

The article concludes that "To our knowledge, there has not yet been a case of pregnancy in an AMAB individual." 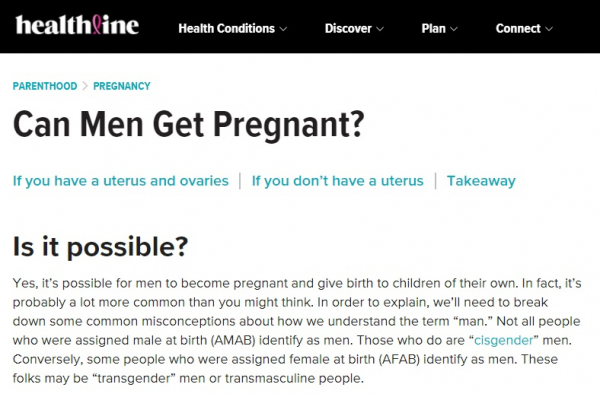 Daily Wire co-founder Jeremy Boreing took to Twitter to decry the ludicrous statements from Healthwire, writing, "Let us break down some common misconceptions about the term man. And by common, we mean misconceptions held by every living person for all of human history including ourselves until 15 minutes ago."

This declaration from Healthline comes in the midst of the "woke" political climate that hopes to not offend anyone and tell them what they can and cannot do, such as get pregnant and bear a child, despite their biological limitations. This "wokeness" has now spread to the medical community.

According to The Atlantic, the Alexandra Cohen Hospital for Women and Newborns opened in the Upper East Side of New York City last year. Some people felt offended that a hospital would suggest that a hospital where babies are born is just for women "because transgender and nonbinary people who do not identify as women can also get pregnant and deliver babies."

Even legislators and leaders have become so "woke" that they are no longer using the terms "pregnant women." Representative Cori Bush of Missouri has referred to pregnant women as "birthing people" in a hearing because, as the pro-abortion-rights group NARAL said in Bush's defense, "we're being inclusive. It's that simple."

But with this inclusivity comes the opposite of it: erasure and exclusivity. Women have argued that the terms "birthing people" "erases women and mothers as worthy categories of identity." Senator Mitt Romney's wife Ann took to Twitter to express her frustration, writing, "The Biden administration diminishing motherhood to 'birthing person' is simply insulting to all moms."

More and more, the LGBT community is trying to claim women's issues as their own. During the fifth annual Women's March in Washington D.C., transgender athlete and activist Schuyler Bailar declared that abortion rights issues are also issues of the LGBT, CBS News reported.

Bailar demanded, "This is a women's issue, and it is also a transgender man's issue."