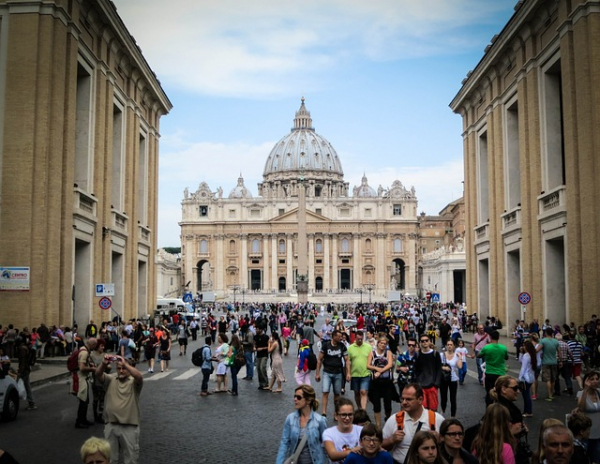 On Monday, tens of thousands of people gathered at the Vatican to pay tribute to Pope Emeritus Benedict XVI. Benedict's body was available for public viewing in St. Peter's Basilica in Vatican City. Mourners were able to give their respects to the former pope.

Pope Emeritus Benedict XVI, the first pope in nearly 600 years to step down as the leader of the Catholic Church, died on Saturday at 95. In an article in Christianity Daily, his death followed reports the previous week that his health had deteriorated. Benedict's passing marks the end of an era in the Catholic Church, and he will be remembered for his contributions to the church and his leadership during a time of great change.

Pope Emeritus Benedict XVI's body is lying in state in St. Peter's Basilica in Vatican City, where it will be available for public viewing until Wednesday. An article in MSN stated that his body is dressed in a miter, the peaked headgear of a bishop, and a red cloak.

On Monday, the basilica doors opened at 9 a.m. local time, and people lined up to pay their respects, with an organ and choir performing "Kyrie Eleison" in the background as mourners passed by the bier. A viewing will also be available on Tuesday. Security officials said that at least 25,000 people would gather to pay tribute to the pope, but by mid-afternoon, the Vatican police estimated 40,000 had lined up to pay respects to the late pope.

Notable individuals who have attended the viewing of Pope Emeritus Benedict XVI's body include Cardinal Walter Kasper, a German theologian who served as head of the Vatican's Christian unity office during Benedict's papacy, and Italian Prime Minister Giorgia Meloni, who has expressed admiration for Benedict's conservative leanings.

Italian President Sergio Mattarella also attended the viewing. Cardinal Kasper has said that Benedict left an "important mark" on theology and spirituality, as well as on the history of the papacy, with his courage to step down due to age and declining health in 2013.

Pope Francis paid tribute to Pope Emeritus Benedict XVI, whom he referred to as a "grandfather," in his New Year's Eve sermon. According to iNews, he described Benedict as a "noble person" and a gift to the Vatican and the world.

Pope Francis visited Benedict at the converted monastery where he was living immediately after his death on Saturday. Prime Minister Rishi Sunak and other world leaders and religious figures have also offered their condolences and paid tribute to Benedict, who made a historic visit to the UK in 2010.

US President Joe Biden, a Catholic, paid tribute to Pope Emeritus Benedict XVI, recalling his time with Benedict in 2011. In a statement, Biden said he and his wife, Jill join Catholics worldwide in mourning the former pope's death and added that he "will always remember his generosity and welcome as well as our meaningful conversation."

In an article in CNA, Pope Emeritus Benedict XVI's funeral is expected to be a smaller event compared to the funeral of Pope John Paul II in 2005, which drew millions of people and heads of state from around the world.

Benedict served as pope for a shorter time. He was considered a more divisive figure due to his defense of traditional values and his struggle to impose his authority on the church during a crisis, including the clerical sexual abuse scandal.

In contrast, Pope Francis, an Argentine Jesuit is known for his compassion and connection to the people, has paid tribute to Benedict and raised the possibility that he may one day follow in Benedict's footsteps by resigning due to his declining health.

Pope Francis will lead the funeral of Pope Emeritus Benedict XVI, an unprecedented event in which a current pope celebrates the funeral Mass of a former pope. The funeral will take place Thursday at St. Peter's Square and will be marked by simplicity, following Benedict's wishes.

Benedict's tomb will be located in the crypt of the grotto under St. Peter's Basilica, which St. John Paul II previously used. The body of St. John Paul II was moved upstairs into the main basilica before his beatification in 2011, according to Vatican spokesman Matteo Bruni.

Related Article: Pope Benedict XVI Passes Away at 95, Remembered for His Defense of Orthodoxy and Historic Resignation