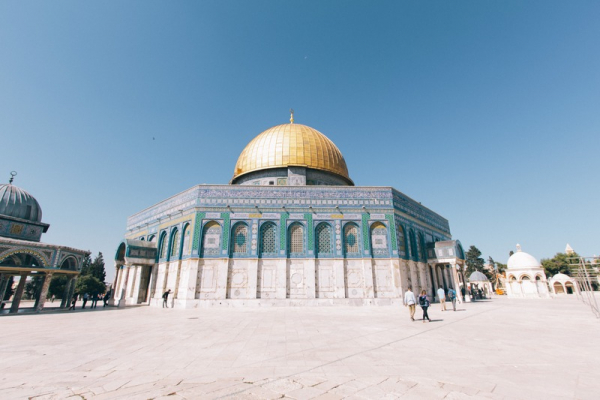 Itamar Ben-Gvir, Israel's right-wing National Security Minister, caused controversy on Tuesday when he visited the Temple Mount, the holiest site for Jews, for 15 minutes. His visit has reportedly prompted the United Nations Security Council to meet in New York later this week to discuss the matter.

Itamar Ben-Gvir, a controversial figure, tweeted a photo of him on the Temple Mount along with security officials and wrote that the Israeli government, of which he is a member, will not give in to Hamas, a "vile organization of murderers." He stated that the Temple Mount is open to all and that Hamas's threats will not deter him, as there is now a government in Jerusalem that has changed the times.

How the Temple Mount Became a Symbol of National and Religious Identity for Jews, Muslims, and Christians

In an article in Washington Post, Jerusalem is considered a significant and holy city for Jews, Christians, and Muslims due to its connections to the Hebrew Bible and events in the life of Jesus.

For Jews, the city is central to their religion and the site of two temples destroyed in ancient times. Many Jews pray to face Jerusalem and believe the Messiah will come when the temple is rebuilt. The Western Wall, one of the remaining walls of the temple, is an important worship site for Jews.

For Christians, Jerusalem is where Jesus preached, died, resurrected, and is also believed to be a central site for the Second Coming of Jesus. It is a major pilgrimage site for Christians from around the world.

For Muslims, Jerusalem is a site of key events in the life of Jesus and other important figures. It is also where the prophet Muhammad ascended to heaven according to traditional Islamic teachings. The city has had Muslim shrines for over 1,300 years.

In 1967, Israel captured the eastern half of Jerusalem and annexed it, including the Old City and its holy sites. The international community did not recognize this action, and the Old City has a large Palestinian population. The Al-Aqsa mosque, the Dome of the Rock, and the entire area known as Haram al-Sharif (or the Temple Mount) are administered by the Jerusalem Islamic Waqf, a Muslim religious organization overseen by the Jordanian government. The Israeli government and certain Orthodox rabbis have direct control over the Western Wall, located at the base of the Temple Mount.

A coalition of Christian groups oversees the Church of the Holy Sepulchre. There have been conflicts and tensions in recent years over attempts by Israel to exercise more authority in the area, including installing metal detectors at the entrances to Haram al-Sharif.

According to Fox News, the Temple Mount has a history of being a source of tension and conflict. In 2000, when former Israeli Prime Minister Ariel Sharon visited the site as an opposition leader, Palestinian leader Yasser Arafat used the visit as an excuse to launch the Second Intifada, a war of terrorism against Israel.

In an article in the AP News, the administration of the holy sites in Jerusalem is complex and involves multiple parties. The Islamic Waqf administers the Temple Mount complex, a trust overseen by Jordan, which previously controlled the Old City. Any attempts by Israel to exercise more control over the area have often led to violence. The Israeli government controls the Western Wall, while a group of Christians administers the Church of the Holy Sepulchre. The religious connections to these sites have been used to both unite and divide people throughout history, and this trend is likely to continue in the present.