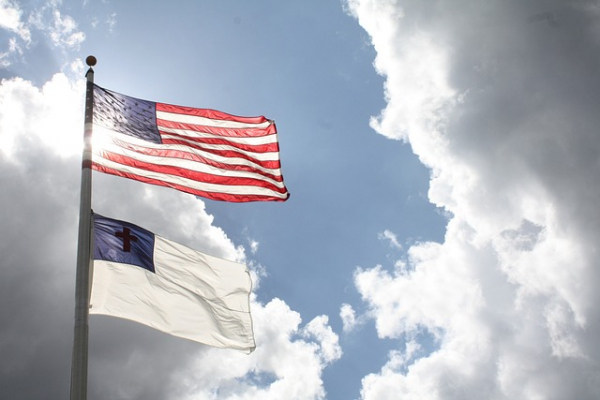 U.S. Representative Glenn Grothman has a flag connected to the January 6th attack on the U.S. Capitol, known as a Christian Nationalist flag, displayed outside his congressional office.

He posted a picture of the flag, which features a pine tree and the phrase "An Appeal to Heaven" on a white background, on his Twitter account, inviting people to visit him at the Longworth House Office Building.

Attack on the U.S. Capitol

On January 6, a group of Trump supporters gathered at the northwest entrance of the U.S. Capitol, including members of the Proud Boys, a hate group classified by the Southern Poverty Law Center. They were angry and shouting slogans.

According to Religion News, as they approached a barricade manned by some police, a white flag with the image of a "Jesus fish" in the colors of the American flag and the words "Proud American Christian" appeared above the crowd.

This flag was one of several examples of religious expression during the attack on the Capitol, which left five people dead. Some insurrectionists used their religious beliefs as a source of strength and justification for their actions. They often reflected an aggressive and hypermasculine form of Christian nationalism, which has been tied to Donald Trump's religious base.

U.S. Congressman Glenn Grothman posted a photo on social media of his office reopening for visitors, with a white flag displaying a pine tree and the phrase "Appeal to Heaven" showing in the photo, positioned closer to the door of the office than the U.S. and Wisconsin state flags. An article in Wisconsin Examiner says that Grothman's office did not comment on the decision to display the flag. Still, critics say it has ties to a sect of Christian nationalism and was deeply connected to the planning of the January 6th riot at the U.S. Capitol.

With the 118th Congress underway, the People’s House has finally reopened to visitors.

If you’re in Washington #DC, I encourage you to stop by my office and say hello! #WI06 pic.twitter.com/9ECLp4GXck

Also Read: Why Religious Freedom Is 'Not Christian Nationalism'

Appeal to Heaven" Flags and Christian Nationalism at the U.S. Capitol Riot

Christian nationalism is the belief that Christians must fight to take back America from non-Christians. The Appeal to Heaven flag, used during the American Revolution, is associated with George Washington and symbolizes citizens' right to armed revolution against tyranny.

Matt Taylor, a Protestant scholar at the Institute for Islamic, Christian, and Jewish Studies, says that possibly, there were hundreds of Appeal to Heaven flags raised on the Capitol grounds on Jan. 6 and at least two instances in which the flags were flown by rioters who breached the building that day.

According to the Jewish Telegraphic Agency, Aaron Mostofsky, an Orthodox Jewish man who participated in the Capitol mob last week, was arrested by the FBI at his home in Brooklyn Tuesday morning. He is facing four charges, including felony theft of government property, and will be charged by the U.S. Attorney's Office in Washington, D.C. The arrest is part of a nationwide crackdown on the Trump supporters who stormed the Capitol building last week. Mostofsky was among the Orthodox Jews who came to the Capitol to protest and claim that President Donald Trump had stolen the election.

Related Article: Christian Nationalism Movement and the Arguments and Fears that Comes Along With it