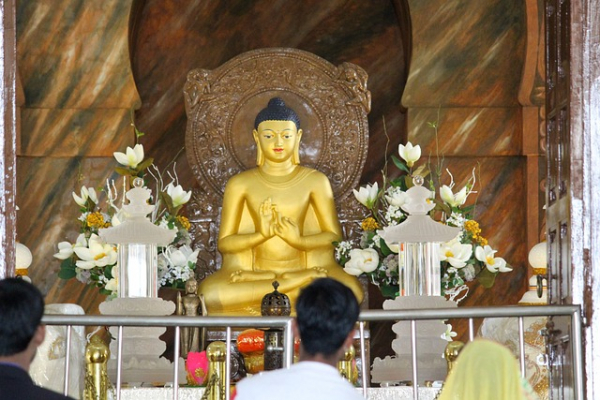 Devanshi Sanghvi, an eight-year-old girl from India, has renounced her multimillion-dollar diamond fortune and joined a strict religious order as a nun.

Her family is also a part of the Jain faith, an ancient Indian religion that promotes non-violence, vegetarianism, and compassion for all living beings.

According to People, an 8-year-old Indian girl, Devanshi Sanghvi, who was set to inherit her family's multimillion-dollar diamond company, Sanghvi and Sons, has chosen to renounce her wealth and become a Jain nun. On Wednesday, she committed to Jainism, an ancient religion based on non-violence and love for living beings, by undergoing a four-day ceremony at a temple.

The girl's family are members of the Jain faith, a small but ancient Indian religion that emphasizes non-violence, strict vegetarianism, and love for all living beings.

During the ceremony, she changed her luxurious clothing to a simple white outfit and had all her hair removed. A family associate said that Devanshi showed religious inclination since she was a toddler and had followed an ascetic lifestyle since a very young age. She is one of the most youthful individuals to have taken the "Diksha" ceremony, and her family is also a member of the Jain faith.

An article in The Guardian talks about Jainism, a religion with more than 4 million followers in India, many of whom come from affluent trading communities like Devanshi's family. Adherents of Jainism follow a strict vegetarian diet and some monks and nuns even cover their mouths with fabric to avoid accidentally swallowing insects.

The religion has come under fire for its ritualistic practices, particularly one that involves death-risking fasting. An illustration of this occurred in Hyderabad, India, in 2016, when a 13-year-old girl died while performing a two-month penance fast during which she was only permitted to drink warm water twice daily. Police charged her parents with manslaughter, which sparked public outcry because it was claimed that they had coerced her into the fast.

Jainism is one of the oldest religions in the world, dating back at least 2,500 years in India. According to Pew Research, the ultimate spiritual goal in Jainism is to be liberated from the cycle of rebirth and attain a state of all-knowing called moksha.

This is achieved by living a non-violent life, or ahimsa, with a minimal negative impact on other living beings. Jainism was primarily passed down through a succession of 24 teachers called Tirthankaras, the most notable being Vardhamana Mahavira, the last of the Tirthankaras and likely a contemporary of Gautama Buddha.

Mahavira and Buddha emphasized self-discipline, meditation, and an ascetic lifestyle as the key to salvation. This was in contrast to the teachings of Vedic priests at the time, who emphasized ritual practices and their role as intermediaries between humanity and the gods. Today, Jainism is the smallest of India's six major religious groups, with only 0.4% of the population identifying as Jain.

According to a survey by Pew Research Center, Indians overall have limited knowledge of Jainism and its practices.