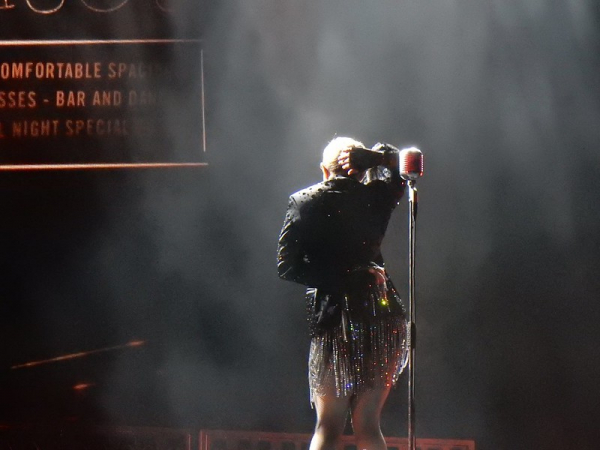 The latest photoshoot for Vanity Fair's Icon issue has caused quite a stir, as legendary pop icon Madonna was featured in a controversial and thought-provoking portrayal of the Virgin Mary and the Last Supper.

The 64-year-old singer was captured by photographers Luigi and Lango, wearing a heart pierced with swords, and also recreated the role of Jesus with 12 female disciples.

Whether or not the photo shoot will be met with praise or criticism, one thing is sure: Madonna continues to push boundaries and challenge societal norms with her bold and unapologetic artistry. Madonna is the subject of Vanity Fair's first "Icon Issue," which honors a great icon of contemporary culture every year.

Madonna, the Queen of Pop, continues to push the boundaries of artistic expression with her recent photoshoot for Vanity Fair's Icon issue. In the daring shoot, Madonna recreated the famous painting of The Last Supper, with the added twist of depicting the Virgin Mary. The singer's veil was with gold embroidery, and tears streamed down her face in the regal shot.

According to Daily Mail, in a statement, Olivier Bouchara, Editorial Content Head for Vanity Fair France, said, "In this special issue, Madonna becomes Madonna again: an icon. Not just the embodiment of a musical trend or a style of dress, but a figure as disturbing as she is sacred."

Madonna's 40th-anniversary Celebration tour, which includes 35 shows in North America and Europe, was announced as the picture session took place. The Live Nation-produced event will begin on July 15 at Rogers Arena in Vancouver before traveling to Detroit, Chicago, New York, Miami, and Los Angeles.

During the interview with Vanity Fair, Madonna said, "This is a good time for me - I'm gathering ideas, getting inspired, hanging out with creative people, watching films, seeing art, listening to music."

This photo shoot is a testament to Madonna's continued artistic evolution and ability to create iconic, thought-provoking work.\

Also Read: UK Government Apologizes for Prosecutors Stating That Certain Passages in the Bible Are 'Inappropriate'

Madonna's recent photoshoot has sparked outrage among conservative Christians who have taken to social media to call the photoshoot "demonic," "Satanic," and "sickening." However, this is not the first time Madonna has faced backlash for her art. In the interview with Vanity Fair, Madonna described her outfit that she felt attacked and exposed.

Madonna criticized the Catholic Church for being hypocrites for their attacks against her Madonna: Truth or Dare documentary, saying that she couldn't believe to see herself get stroked by the Church for failing to understand her work. According to the Star Observer, the singer also felt an affinity for "all-female energy" and agreed with photographers Luigi & Iango's vision of an all-female cast for the photo shoot.

As Madonna sat in the press conference for her film "Sleeping with Madonna," she couldn't help but reflect on her upbringing in a strict Catholic household. The irony of being attacked by the institution she was raised in was not lost on her. She knew that her work pushed boundaries and challenged societal norms, but she never expected the Church to be one of her harshest critics.

Despite the backlash, Madonna refused to back down. She was determined to use her art to create something positive and meaningful. Her bold and unapologetic approach to her work has consistently reflected her fearless spirit and unwavering commitment to pushing the boundaries of artistic expression.

Through her music, film, and other art forms, Madonna inspires and challenges her fans to think differently and question the status quo. She is a true icon and a trailblazer who has changed our thoughts about art and creativity. Despite the criticism and backlash she has faced, Madonna's impact on the world of art and culture will be felt for generations to come.