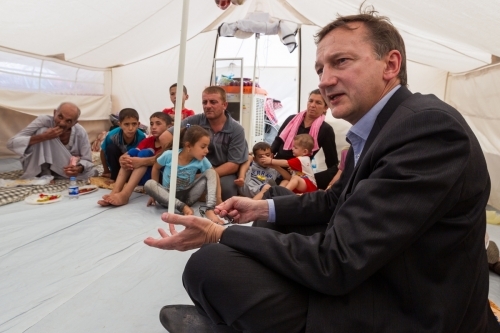 (Photo : WCC/Gregg Brekke)
Peter Prove, CCIA director, speaks with Christian families expelled from Mosul by IS raids. These families took shelter in a tent camp established on grounds of the Chaldean Church in Erbil, Iraq.

The World Council of Churches (WCC) sent a team to northern Iraq last week and said in a press release that the “group came back deeply affected by the depth, intensity, and suddenness of the violence that has left thousands dead and hundreds of thousands more uprooted from their homes and communities.” The WCC, in response, called for the 345 churches that are members of the WCC to respond and take action by seeking help from relief aid organizations.

“The international community must exercise its responsibility to protect these extremely vulnerable people, including Christians and members of other religious communities in the region,” Reverend and Dr. Olav Fykse Tveit, the general secretary of the WCC, said on Thursday.

“We are deeply concerned about our Christian sisters and brothers in Iraq as well as other religious communities,” he added. “It was therefore important the WCC staff made this solidarity visit with churches and other religious leaders at this time.”

Peter Prove, the director of the WCC Commission of the Churches on International Affairs (CCIA), said that local aid organizations reported less than 20% of internally displaced people (IDP) are receiving even “the minimum in adequate emergency support.”

Prove added that focusing aid on IDPs is especially important and urgent because most of them escaped with nothing else but the clothes they were wearing, and they are in urgent need of shelter as winter is approaching.

“Almost every local church in the Kurdistan region is hosting large IDP communities in churches, church buildings, grounds, and other properties,” the WCC statement read.

Tveit further explained, “The application of international military interventions in the region, if any, should be undertaken under a mandate from the United Nations Security Council.”

The situation in Iraq has been garnering particular concern from religious groups as well as the international community, especially because of the fact that the Islamic State has been killing foreigners as well as recruiting foreigners to be a part of their ranks.

President Obama recently said in a statement after a second American journalist was killed by the Islamic State that he believes the militant group must be “degrad[ed] and destroy[ed],” and have repeatedly mentioned through the press that he is focusing much attention in the situation in Iraq.