According to The Blaze, both Artur and his brother Dawid Pawlowski were detained for violating the Queen's Bench Order by conducting Saturday's church service.

Their arrest came after the Alberta Health Services won a Court of Queen's Bench Order on Thursday that prohibits all public health meetings, marches, and demonstrations during the coronavirus pandemic. The order introduces additional coronavirus-related meeting limitations, including the usage of facial masks, social distancing, and participation limits.

Pawlowski, who gained international acclaim last month for throwing Canadian police and a health official out of his church while referring to them as and "gestapo," organized a church service in Alberta on Saturday, where "dozens congregated without masks and with no physical distancing," reports Calgary Herald.

As per the official statement released by Calgary Police, the brothers face charges of organizing an illegal in-person meeting, which includes demanding, inciting, or inviting people to join, as well as supporting and attending an illegal public gathering.

The statement said further that the Pawlowski brothers were presented with a new court order prior to Saturday's church service, but they were arrested because they "choose to disregard the conditions." A Canadian court recently ordered Alberta Health Services to put an end to numerous protests and marches that violate public health directives throughout the province.

Pastor Artur was arrested by the police less than an hour after the church service. He notoriously referred to them as "Nazis" the last time they and health authorities came to his church to issue him court papers. At least six patrol cars stopped the car Artur drove on his way home. Because of Saturday's church service, Calgary Police told Artur and his brother Dawid that they were being arrested for breaking public health orders for assemblies. 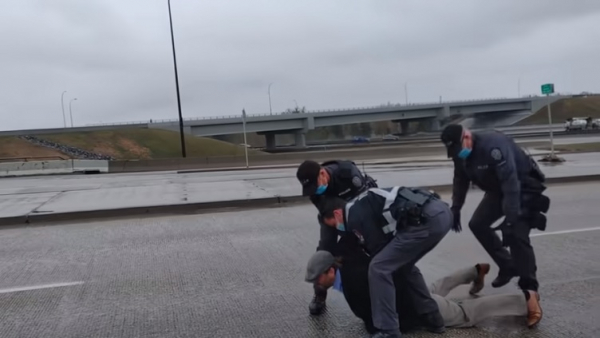 A screenshot of a video showing Dawid Pawlowski being arrested alongside his brother, Pastor Artur Pawlowski.

According Rebel News, the Fortress (Cave) of Adullam pastor was apprehended by a SWAT squad and forced to kneel in the center of a busy highway yesterday.

"It was clear from the moment of his arrest that this had nothing to do with a virus, and everything to do with political control," comments the outlet that's following through Pastor Artur's arrest.

Some witnesses also called out the police for doing something that wasn't normally done in free Canada.

"Shame on you guys, this is not Communist China. Don't you have family and kids? Whatever happened to 'Canada, God keep our land glorious and free?" an onlooker shouted at police as they arrested Pastor Artur.

For five minutes, reporter Adam Soos was able to talk with Pastor Artur. Based on their call recording, the pastor, who's currently in jail, was unaware of the worldwide outpouring of help for him, and still unaware that his three-person law team had been attempting to communicate with him nonstop, but that police had declined to forward their calls to him.

"This was an interesting interview for a number of reasons. But the fact that police were abusing him, and stopping him from getting legal counsel is outrageous - and shows that this has never been about a pandemic," states the political and social commentary media.

In April 2020, the Christian pastor was one of the first Canadians to receive a lockdown ticket for the 'crime' of feeding the homeless in downtown Calgary.

About a half-dozen police officers reportedly approached him and slapped him with a $1,200 fine.

But Pastor Artur is not alone; several other Canadian pastors are still able to step up and struggle for their religious rights, including Pastor James Coates of GraceLife Church in Edmonton, who received a similar health injunction before being sentenced to 35 days in prison for failing to comply, and who remains on trial to this day for failing to comply with government COVID-19 health laws.

Pastor Coates's church moved to a new site after police erected a barrier around it to keep protesters away. The fence was subsequently broken down by protesters.

Soos started a crowdfunding campaign meant to raise funds to cover Pastor Artur Pawlowski's legal fees. All proceeds will go to The Democracy Fund, a registered Canadian charity helping the "Fight The Fines" project. Those who want to donate to Pastor Artur's cause can donate here.