CCP Authorities Relentlessly Harass, Pressure Chinese Christian To Cease Preaching Gospel: ‘Woe To Me If I Do Not Preach’

Chen Wensheng, a Christian who attends a house church in Hengyang in China's Hunan province, has been apprehended more than 100 times by the authorities over the course of many years. Nonetheless, he has prepared himself for the possibility of being imprisoned and preaching the gospel while in jail.

According to ChinaAid, on the morning of June 16, police detained Chen Wensheng and many others and took them to the hospital for a physical exam and the Nucleic Acid Amplification Test (NAAT), a kind of viral diagnostic test for SARS-CoV-2, the virus that causes COVID-19. An officer called the families of individuals who had been arrested to inform them that their relatives would be held for 5-10 days.

When Chen's wife contacted him on the evening of June 17, she informed him that officials from the Hengyang Municipal State Security Department, as well as the United Front Work Department, had called her.

She received many phone calls from Xiao, one of the directors, who hoped that she would be able to prevent Brother Chen from preaching the gospel on the streets.

Chen's son and the school where his daughter-in-law works have also been visited by officials from relevant departments, who have threatened both of them. Chen's daughter-in-law was warned by Chinese Communist Party officers that if Chen continued openly preaching the Gospel, they would not only remove her from public service, but also block Chen's granddaughter from going on the National Civil Servant Examination or school teaching.

"Thank God for granting my family the opportunity to learn the lesson about the cross and suffering because of proclaiming the gospel... He will be responsible for this and hold us through it. Glory be to God," said Chen in response. From being a former drug addict, he has transformed into a zealous "street preacher" who has shown that no number of arrests would deter him from his mission.

The Public Security Bureau of Suining County slapped a 15-day administrative arrest charge on Chen for "disturbing public order" for preaching the Gospel on the streets of Suining County, Shaoyang City on May 21.

Authorities released Chen after a 15-day detention period. On June 15, he and other Christians from the Church boarded the light train and traveled to Wenzhou ten days later. 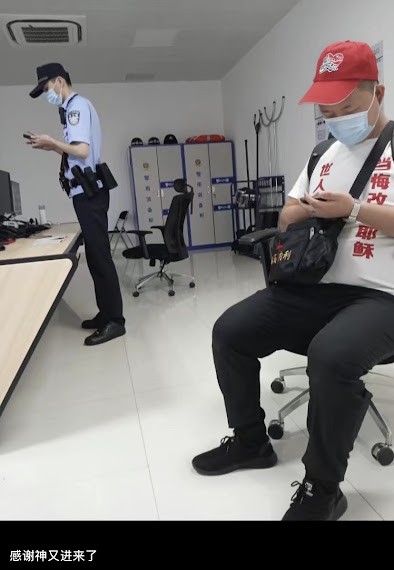 The gospel was preached to train passengers by Chen and his associates, and some of them complained to the authorities. A police investigation ensued, and the group was held in the Wenzhou Guidao District Bureau of Public Security for the night. They were taken to the Wenzhou Detention Center in the afternoon of June 16 by police officials.

"You do not have the right to detain us," Shao, one of the Christians traveling with Chen, told the authorities. "We are the Lord Jesus' servants. If He does not allow you to detain us, none of you can..."

Following the group's transfer to the hospital for the NAAT and a medical examination on June 16, they were held in police custody for 5-10 days. After preparing to transfer Chen and his friends to a prison facility, authorities got an unexpected directive from the Public Security Bureau stating that the case investigation had been terminated.

This was the first time Chen had seen a paper ending a case in his more than 100 arrests by police over the course of previous decades.

As soon as police were notified of the "Decision to Terminate Case Investigation," they were required to release Chen and the other defendants immediately. Amazed, Chen wrote the following on WeChat.

"Thank the Lord Jesus for intervening in this affair. Thank God for letting us wear the gospel T-shirt this morning while three police officers transported us [handcuffed] to the hospital and express train station. Today, while we took every opportunity to proclaim the gospel to others, many read the gospel account printed on our shirts.

May God have mercy on the world and save more sinners.

The hunt for him continues...

Chen's whereabouts were tracked by officials from the Henghang and Wenzhou Public Security Bureaus, the State Security Department, the community, and the United Front Work Department on June 15 and 16. It was clear to him and the other Christians that when they got off the fast train, police officers would surely be waiting for them. Nonetheless, as was customary to them, they preached the gospel.

"Woe to me if I do not preach the gospel," Chen declared.

A brother-in faith from Wenzhou traveled more than an hour to pick up Chen and the other members of the group for supper on the afternoon of June 16th. Chen's group was then driven to their respective homes, where they washed and slept.

Later, they were forced to board the express train by police officials.

Upon the arrival of Chen and his group in Wenzhou, CCP officials began a campaign of harassment against the Christian who was accommodating them. State Security agents even paid a visit to his father's home in order to look for Chen. He was also requested to call his elder brother. He received a phone call from the head pastor of the host church, who warned him that housing Brother Chen and the others might have severe ramifications.

The host persisted in accommodating, feeding and providing transportation to Chen, despite being followed by officials from the Bureau of Ethnic and Religious Affairs.