The Bible Says Only The Earth Can Sustain Life, And Science Proves It

Despite all of the efforts to find life outside of planet Earth, the fact remains that only the planet where the human race lives and thrives on is capable of sustaining life forms.

A study published in the journal Monthly Notices of the Royal Astronomical Society on June 23 looked at the data of ten Earth-like exoplanets, all of which are known masses orbiting around the so-called "habitable zones" around their stars, Space reported.

A habitable zone is known as a region around a star that contains the right temperature for water to exist. The researchers specifically looked into this because it is necessary for a biochemical process called "oxygenic photosynthesis," a complex mechanism by which plants produce the oxygen needed to support the demands of multicellular life "anywhere in the universe," they noted.

"The study of the physical conditions which might favour oxygenic photosynthesis (OP, hereafter) could also strongly constrain the parameter space for complex life," the researchers said. "Indeed, complex life on Earth is fully dependent on OP."

OP requires energy from solar radiation, i.e. light, to occur. Not all stars are capable of providing planets with enough amount of solar radiation for OP. The researchers calculated how much photosynthetically active radiation (PAR) each of the ten exoplanets in the study receive from the stars around them and found that the PAR each of them receive is not enough to sustain photosynthesis capable of producing a biosphere as rich as the Earth's.

The researchers noted in a statement that of the ten exoplanets in the study, only one of them "comes close to receiving the stellar radiation necessary to sustain a large biosphere." This planet, known as Kepler-442b, is a rocky planet that's about double the Earth's mass. It orbits a moderately hot star located at about 1,200 light years away. 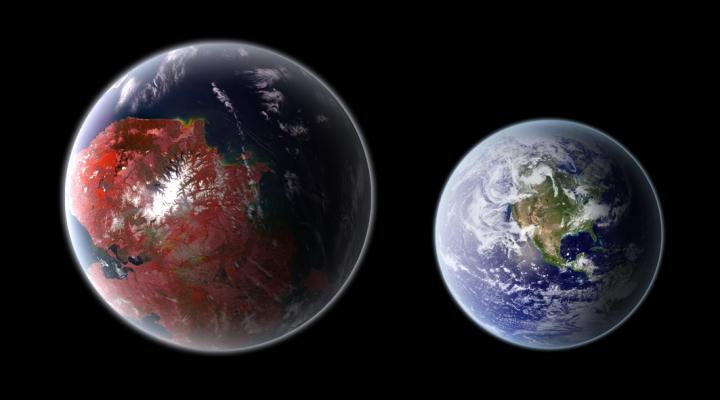 Not enough for life

The researchers specifically looked into the amount of solar energy these planets received from the stars around them to know if it will be enough for living organisms to use in producing molecular oxygen and nutrition they need to live.

They found that the stars that were half as hot as the Earth's Sun are not able to sustain Earth-like biospheres because they cannot provide enough PAR. While some planets such as Kepler-442b receive enough radiation for OP, the radiation they receive is not enough to sustain a rich biosphere.

The researchers also noted that stars with temperatures a third of the Earth's Sun, known as red dwarfs, are not able to provide planets with radiation enough for photosynthesis. They added that while some stars hotter than the Earth's Sun can provide up to ten times more radiation than red dwarfs, they "generally do not live long enough for complex life to evolve."

While the study only involved ten exoplanets, the scientists, from the University of Naples, understand the stars in the Milky Way are not able to provide the right conditions for OP to occur, which means photosynthesis-dependent life might be rare or non-existent out there.

"Since red dwarfs are by far the most common type of star in our galaxy, this result indicates that Earth-like conditions on other planets may be much less common than we might hope," Prof. Giovanni Covone of the University of Naples, lead author of the study, said.

"This study puts strong constraints on the parameter space for complex life, so unfortunately it appears that the "sweet spot" for hosting a rich Earth-like biosphere is not so wide," Covone added.

Ken Ham, founder of Answers in Genesis, indicated that the study simply proves the Bible's assertions about the Earth, and the heavenly bodies such as stars, are true.