Kate Dalley of "The Kate Dalley Show" recounted their horrific hospital experience, which transformed her husband's pneumonia into what she referred to as "COVID pneumonia."

Dalley recounted their personal ICU experience in a video posted by TruthINRADIO on Rumble to highlight how the "NIH CDC Covid protocol" used in hospitals is killing people.

"And here's the bottom line for you...it's not COVID that's killing people, it's the protocol. It's overtreatment," she said. 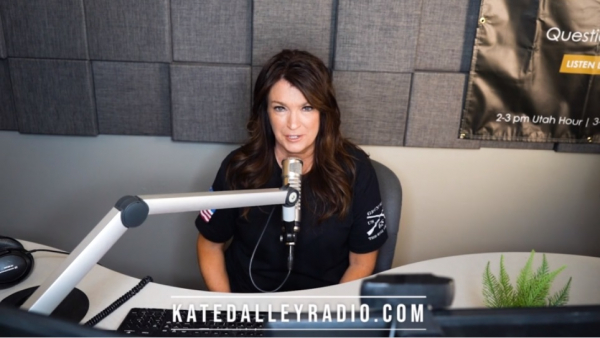 She explained that their choice to go to the hospital was based on the advice of a friend who is a medical practitioner. She said that her husband was ill with pneumonia and that after a week, his oxygen level had dropped to 79.

When they arrived at the hospital's emergency room, a nurse attempted to mask her husband and even called security when Dalley refused this protocol since her husband had trouble breathing.

She also recalled being smirked at when she said "no, absolutely not" when asked whether they had previously been vaccinated.

"Yes, they took X-rays and a Covid test and we knew it would come back positive. Not because it was certainly "Covid", but because I know the test is turned up to a huge, insane manipulated 40 rotation/magnifications to encompass ALL flu, pneumonia, virus. It's a fraudulent test," she said.

As they anticipated, her husband's test returned positive for COVID.

"Everyone shifted immediately into the staff wearing hazmat space suits with hoses and acting like we were in the middle of bubonic plague with straight, serious faces and double masks. (Just minutes before this we were fine)," Dalley described.

"My husband's X-rays were quickly diagnosed as 'Covid Pneumonia.' I simply asked the little ER doc what was the difference from regular old pneumonia. The ER doctor was very flustered. I asked him to describe Covid to me, has he ever seen a sample of it, or under a slide or microscope, what is it? Instead of just answering that, he said that I 'clearly had an agenda,'" she continued.

Dalley explained that she had searched up X-rays of normal old pneumonia from years ago, before COVID, images from 2017 and 2006. She described them as strange and identical to her husband's X-rays at the hospital.

"With regular viral pneumonia, you just increase oxygen and it's just chicken soup and ibuprofen and you go home most of the time, once stable with oxygen," she wrote in her blog. "With 'Covid Pneumonia'- it's an ENTIRELY different protocol."

"It's space suits, and gloves, and whisked off to the ICU and talking about a ventilator consistently," she said. "We had been there ONLY one hour before we got the prepped ventilator talk. We emphatically refused that remedy. They looked at me like I was from Mars."

Dalley, thankfully, said she knew qualified doctors from all over the nation to contact ahead of time, and that's how she knew what to ask at the hospital. She requested extremely large dosages of Vitamin C, D, and NAC (N-Acetyl Cysteine).

Even though she was informed straight away by the hospital that these are not part of the hospital's "protocol" or treatment plan, she persisted.

"I was the first and only person to absolutely refuse the ventilator. Why is that? Why aren't people refusing it? Do they really think it's their only choice to 'save' their loved one? It's the kiss of death, quite frankly,"she said.

"Last year- they put most everyone with the label of Covid on a ventilator, right away- for a solid year! Makes me sick to think about the fact they resorted to such archaic and horrifying measures without asking why," she went on.

Another perplexing thing she found in the hospital was that the doctors kept reducing the dosages of those vitamins and minerals without telling her, but when she caught this happening, the quantity was adjusted until it was correct.

She said that they attempted to sneak in a very small oral dosage without informing her of the change, but she made certain that her husband received large amounts of it.

She also noted the doctors' unwillingness to examine Ivermectin or Hydroxychloroquine, despite many studies proving their efficacy and adding them to the protocol.

Dalley's perseverance paid off, as her husband recovered in the first 35 hours, was on 100% high flow oxygen by Sunday night, and was entirely off the machine by Wednesday.

While the doctors at the hospital informed Dalley that her husband was simply "lucky" and "one of the lucky ones," Dalley recognized the truth: it was because they broke the recommended protocol. Her 56-year-old husband survived despite the fact that he was unvaccinated, pre-diabetic, and in poor health.

Dalley came to the following conclusions as a result of the experience:

In light of these developments, Dalley encouraged individuals with loved ones in hospitals to speak out and demand the appropriate procedure or medicine for the patient's condition, or to have their loved ones removed if the medical staff does not listen. She also discouraged individuals from using the ventilator.

"I found out that the doctors were for the most part- quite uneducated on Covid. Really clueless. They didn't want to look dumb, so they say Covid is still so "elusive" (after 19 months), and that they just don't know what works," she said.

"The only elusive thing about Covid is the truth," she concluded.

Watch Dalley explain how the CDC protocol given to doctors is what is killing people, not COVID: