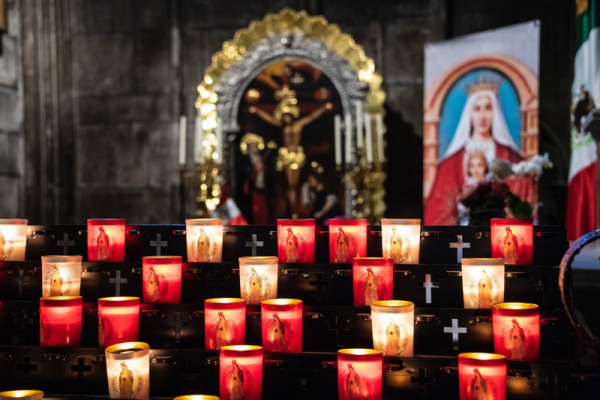 As we look back on 2022, it has been rough but tumultuous and eventful. From major global events to local happenings, countless news stories caught our attention and shaped our understanding of our world, especially events that have influenced and touched our religious beliefs.

The Top 10 News Stories of the year were selected based on their impact and significance to readers. Whether you followed the news closely throughout the year or are just catching up now, these are Christianity Daily's stories you won't want to miss

1. Megachurch Sells Property And Goes Completely Virtual Due To Decline In Donations

The Potter's House of Denver, a megachurch in Colorado, has decided to sell its physical property, worth an estimated $12.2 million, and transition to being a completely virtual church. According to Pastor Touré Roberts in a report by Christian Post, the COVID-19 pandemic and government restrictions on religious gatherings led to declining donations and the decision to sell the property and continue online offerings.

DHI Communities will develop the 32-acre property into more than 500 duplexes, flats, and a park. This move comes as many churches across the US face declining attendance, making it difficult to close their physical facilities. A poll by Lifeway Research found that while 98% of Protestant churches are again available for in-person worship services, attendance is still much lower than pre-pandemic levels. Experts predict that the pandemic may lead to a loss of faith among young people.

Fast-food chain McDonald's has launched a marketing campaign where customers can win tarot card readings by purchasing meal deals. According to USA Today, the promotion, which will run for two days, will offer a free McChicken or McDouble with the purchase of medium fries at participating restaurants. McDonald's has partnered with astrology-trained tarot card reader Madam Adam, who will deliver readings to select customers through his social media accounts. Customers must disclose their Zodiac sign and name on Adam's Instagram or TikTok posts to enter.

Adam will also hold a live webcast during which he will "randomly select a lucky few" for personalized readings. The promotion coincides with the start of Mercury retrograde, an optical illusion believed by astrologers to impact life on Earth. As reported by CBN News, some sources have criticized the promotion and tarot reading in general, stating that the Bible prohibits divination and that tarot readings are a form of divination that uses occultic rituals to predict destiny. They encourage people to trust God rather than seek guidance from tarot cards or other divination techniques.

Pastor Steven Furtick and his wife, Holly, of Elevation Church, have faced criticism for supporting their teenage son Elijah's songs about sex, guns, and money. Elijah, who goes by the name "dothedash!" has released a series of pieces called "Teen Machine" on his YouTube channel. The songs contain lyrics that reference wealth and guns and have sexual themes.

Keith Bell, an associate pastor at Thomas Road Baptist Church, criticized the Furticks for their support of Elijah's work in a Facebook post, citing a verse from 1 Timothy 3 about the importance of managing one's household. Christian hip-hop artist Ruslan KD also expressed his concerns, saying authenticity and congruency are essential values for a hip-hop artist to possess. The Furticks have defended their support of Elijah's work, with Steven expressing pride in his son's project and Holly saying she is "so proud of this project."

4. United Methodist Church Associate Pastor And Drag Queen Gives Blasphemous Speech On How 'God Is Nothing.'

According to an article in The Blaze, Isaac Simmons, a candidate for ordination in the United Methodist Church and associate pastor at Hope UMC in Bloomington, Illinois, has caused controversy with a video in which he declared that "God is nothing." In the video posted to his website and described as being dedicated to "queer spiritualists," Simmons repeatedly denied the existence of God, the Bible, and religion, claiming that queer spirituality and LGBTQ+ identity are genuine expressions of divinity.

Simmons, who goes by the stage name of Ms. Penny Cost and hosts "drag queen Sundays," also criticized the "toxic masculinity" and "oppressive regime" of traditional Christianity and the "Christian terrorists" who oppose the LGBT movement according to a report of Religion News. The United Methodist Church is currently facing a split over LGBT issues, with the more conservative Global Methodist Church denomination breaking away due to its traditional view of marriage and prohibition on ordaining LGBT clergy.

Lysa TerKeurst, the founder of the Christian non-profit Proverbs 31 Ministries, has filed for divorce from her husband, Art TerKeurst, after he allegedly spent over $100,000 on an "illicit sexual" affair with a woman he met online. According to Christian Post, Lysa had previously decided to divorce Art in 2017 for his infidelity and substance abuse, but the couple later reconciled and renewed their vows. However, in a recent court filing, Lysa claimed that Art broke those renewed vows and admitted to "illicit sexual behavior."

Art has requested post-separation support, alimony, and the rescission of a postnuptial agreement in response to the divorce petition. According to the Ministry Watch article, Lysa denied his request and accused Art of showing "narcissistic and sociopathic tendencies." The court filing also included text messages between Art and the woman he had an affair with, who he reportedly met on SugarDaddy.com.

Mark Driscoll, a controversial evangelical pastor and the author is set to speak at a marriage conference hosted by Jimmy Evans' XO Marriage at Fellowship Church in Texas. Driscoll is the founding pastor of Trinity Church in Arizona, and Evans is one of three church directors. The conference will also feature speakers associated with the Association of Related Churches (ARC), which has been named in lawsuits alleging the organization covered up sexual abuse and harassment by ARC pastors.

Several ARC pastors have resigned or taken sabbaticals due to sexual scandals. Despite these allegations, Driscoll has continued to speak at conferences and events hosted by ARC churches. According to Seattle Times, Driscoll has faced allegations of un-Christlike behavior and bullying members of his former church, Mars Hill Church.

Joe Schimmel, a pastor and documentary filmmaker, has claimed that Marvel's film "Doctor Strange in the Multiverse of Madness" contains satanic themes and influences families and children with its dark content. According to CBN News, he has also accused the movie of being sacrilegious, citing a scene in which Doctor Strange performs a spell involving water turning into wine and transforming into a figure resembling Jesus Christ.

Schimmel has also said that Doctor Strange and the real-life occultist Aleister Crowley have similarities and that the film contains many spells and witchcraft, as cited by Focus on the Family's Plugged in. He has also claimed that several well-known comic book writers, including Alan Moore, Grant Morrison, and Stan Lee, have used seduction, manipulation, the occult, and the Bible to give children a distorted view of God. Schimmel advises Christians to study the Bible and be vigilant in protecting their children from such content.

8. 55 Federal Agencies Now Tracking Those Who Applied For Religious Exemptions To COVID Vaccine

The Liberty Counsel Action, a government watchdog group, has found that up to 57 policy amendments have been drafted by 55 departments under the Biden administration, seeking to track federal employees who request exemptions from COVID-19 vaccine requirements. Some of these policies also follow all types of exemptions, including those related to religious beliefs or practices. The guidelines have raised concerns over privacy violations by the federal government, as they will allow the government to permanently store religious and medical data on employees who request exemptions.

The 55 federal agencies that have implemented rule changes include the Department of the Army, the Department of Defense, the Department of Homeland Security, and the Department of the Treasury, among others. In a report by Fox News, Republican Representative Ralph Norman of South Carolina has introduced a bill called the "Religious Freedom Over Mandates Act," which would prohibit federal funds from being used to create systems for tracking individuals who seek religious exemptions from COVID-19 vaccine requirements.

9. Ukrainian Pastor Says 'God Is Sending Angels To Protect Us,' Reveals Many Now Turning To Christ Amid War

Pastor Karen Zelfimein of Odesa, Ukraine, has reported a series of miracles in Ukraine during the ongoing conflict with Russia, including Russian tanks running out of fuel and a Russian ship being stranded in the middle of the sea due to lack of energy.

Zelfimein also shared stories of angels being seen in the sky and children being born in the subways of Kyiv during the conflict. The pastor believes these events signify God's protection and care for the Ukrainian people. He also cites the fulfillment of a biblical promise to Abraham that he would be the "father of many nations" in the life of Ukrainian President Volodymyr Zelensky and other Jewish leaders in Israel.

Read More: Ukrainian Pastor Says 'God Is Sending Angels To Protect Us,' Reveals Many Now Turning To Christ Amid War

An American-Israeli pastor serving in Belarus has reported that Ukrainian soldiers are experiencing divine encounters, including bullets narrowly missing them and tanks running out of fuel, during the ongoing conflict with Russia. In a report by All Israel News, a Ukrainian pastor in Lviv has also reported similar miraculous events, stating that "God fights our battles."

The pastor in Belarus has expressed concern about the effect of the war on innocent people and hopes and prays for its immediate end. Wartime miracles have also been reported in Israel, including during the Six-Day War in 1967. Volodymyr Zelensky, the current President of Ukraine, is Jewish. The United Kingdom has imposed sanctions on Belarus in response to Russia's military exercises, which the UK sees as supporting and enabling Russia's invasion of Ukraine.

As we reflect on the top news stories of 2022, it's clear that they have had a significant impact on both individuals and the global community. From heart-wrenching tragedies to inspiring triumphs, these stories have shaped our understanding of the world and encouraged us to come together in prayer for a brighter future. Here at Christianity Daily, we are committed to bringing you the latest and most important news from Christianity and beyond. As we look ahead to the new year, let us hold onto hope and faith that the future will bring us more blessings and uplifting news.