Facebook is arguably the biggest social media network in the world, with 2.8 billion active users in 2021. This makes for a major platform that can be used by world leaders, politicians, religious leaders, and more to reach their followers. It's also a breeding ground for misinformation campaigns.

One of Facebook's major flaws has been pointed out in a report that highlights how the company allows communist China accounts to go unchecked as it spreads propaganda, while quashing conservative voices in its own backyard.

Red State accuses Facebook of being "protective" of CCP-approved accounts and posts that promote communist propaganda and allowing the CCP to "operate unimpeded" on the social network. Proof is provided by the Media Research Center's NewsBusters, which claims that 40 accounts on Facebook, which collectively have more than 751 million followers, are "managed by Chinese state-controlled media outlets."

Forty accounts may not seem like much, but when compared to Facebook accounts of U.S. mainstream media outlets such as CNN, ABC News, NBC News, CBS News, The New York Times, The Washington Post, and even FOX News, the CCP-run accounts still have over 6 times bigger an audience than the U.S. media outlets have. 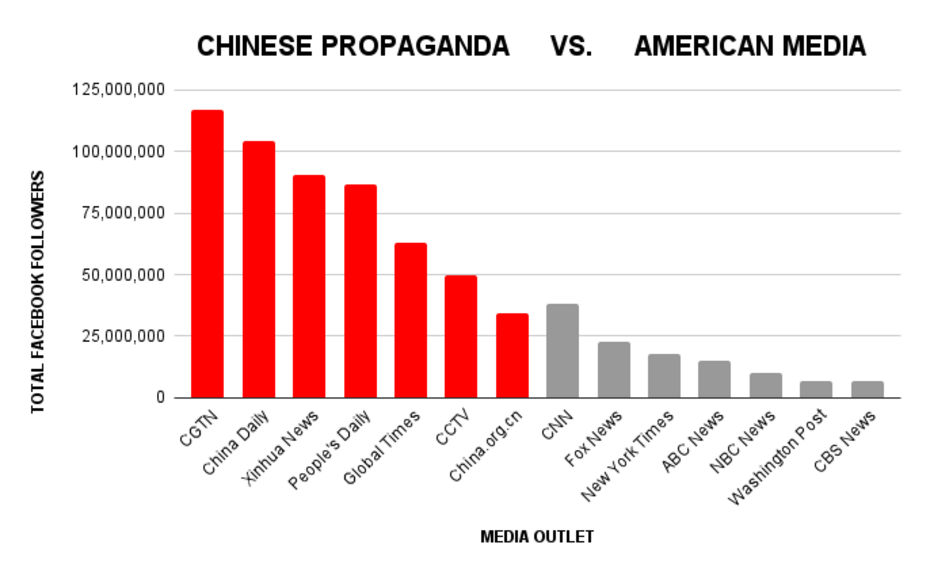 This begs the question, what is Facebook doing to ensure that these accounts, which are state-run by the CCP, are sharing factual information and not spreading propaganda? The answer is not much.

"Facebook has also allowed China to used its state-controlled media presence on the platform to push propaganda aimed at Hong Kong's pro-democracy protesters and activists," the report reads. "A number of posts have also been used to build support around China's authoritarian crackdown in Hong Kong."

Moreover, China has been using its state-controlled media presence on Facebook to rationalize and justify the CCP's human rights violations against religious minorities, especially the Uyghur Muslims in the Xinjiang Province. Posts can be found attacking the human rights accusations aimed at the CCP, often claiming that they are just merely fighting back against terrorism.

In May, the Associated Press and Oxford Internet Institute found that China's growing popularity on Twitter was mostly thanks to "an army of fake accounts that have retweeted Chinese diplomats and state media tens of thousands of times, covertly amplifying propaganda that can reach hundreds of millions of people-often without disclosing the fact that the content is government-sponsored."

There is a danger to how communist China spreads propaganda online, as AP reports it can "distort the information environment, deepening the reach and authenticity of China's messaging."

Senior lecturer Timothy Graham of the Queensland University of Technology warns that right now, there is a "seismic, slow but large continental shift in narratives." China is banking on time, as Graham explained, "Steer it just a little bit over time, it can have massive impact."

This recent report of China's influence via Facebook comes after reports of the CCP spending millions of dollars to pay major western media, such as Time Magazine and Foreign Policy, to promote its propaganda.